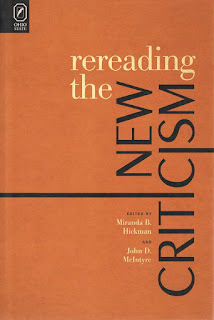 Rereading the New Criticism, a book edited my Miranda Hickman and John McIntyre that includes a chapter I wrote on the ethical dimensions of the old New Crit, has been out for a few months — but the following short review has only just now appeared in Choice, the journal in which the American Library Association assesses new scholarly work.  They like the book.  I hope you will, too.

Anyone who has taught introductory undergraduate literature courses at an American university will readily admit that New Criticism has remained an important influence on contemporary theory and pedagogy, despite continuing reports of its demise. This edited volume offers a welcome reassessment of the continuing legacy of the New Criticism and as such updates and complements The New Criticism and Contemporary Literary Theory, ed. by William Spurlin and Michael Fischer (1995). Hickman (McGill Univ.) and McIntyre (Univ. of Prince Edward Island) arrange these essays in three broad categories: the first explores some distinctive and sometimes surprising ways that New Criticism anticipated more recent critical positions on politics, gender, and ethics; the second considers the close relationship between New Criticism and modernism; and the third offers an analysis of the influence of New Criticism on literary pedagogy, including calls for developing a new formalism for the 21st century. Though all of the essays are strong, particularly useful are Hickman's introductory essay exploring the ways in which histories of literary theory tend to oversimplify and distort New Criticism and Tara Lockhart's treatment of the significance of Cleanth Brooks and Robert Penn Warren's contributions to literary pedagogy through their textbooks. Summing Up: Highly recommended. Upper-division undergraduates and above. -- R. D. Morrison, Morehead State University