That Mona Lisa Snarl: Jehnny Beth as the Gioconda of Rock 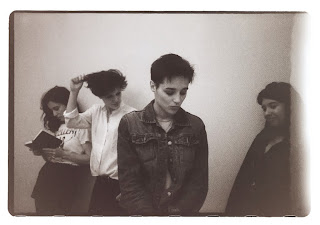 Jehnny Beth, who fronts the post-punk band Savages, is the Mona Lisa of rock.  I don't mean that she's got an enigmatic smile—in fact, I can't recall seeing her smile during a performance.  I mean that she embodies whole traditions of rock front-man charisma, rolling them all into one dynamic whole in exactly the way the great critic Walter Pater saw Leondardo da Vinci's "La Gioconda" (the name for the figure and painting we commonly call the "Mona Lisa") embodying the history of many forms of beauty from the history of art.

We see this most vividly in the famous passage from The Renaissance on "La Gioconda," where Pater represents the woman in the portrait as embodying a synthesis of all the different forms of feminine beauty that come and gone in Western art.  “The presence that rose thus so strangely beside the waters,” writes Pater, of the woman in Leonardo’s paining, “is expressive of what in the ways of a thousand years men had come to desire.”  He continues in his characteristically extravagant style, which you’ll probably either love or hate:
Hers is the head upon which “all the ends of the world are come,” and the eyelids are a little weary. It is a beauty wrought out from within upon the flesh, the deposit, little cell by cell, of strange thoughts and fantastic reveries and exquisite passions. Set it for a moment beside one of those white Greek goddesses or beautiful women of antiquity, and how they would be troubled by this beauty, into which the soul with all its maladies has passed!  All the thoughts and experience of the world have etched and molded there, in that which they have the power to refine and make expressive the outward form, the animalism of Greece, the lust of Rome, the mysticism of the middle age with its spiritual ambition and imaginative loves, the return of the Pagan world, the sins of the Borgias.

This woman in Leonardo's painting may have her roots in the beauty of classical antiquity, but he's painted her such that she's come to embody much more than that.  She includes the fleshier, less idealized beauty of Roman art, the mystical enigma of medieval Madonnas, and a worldliness drawn from Renaissance portraits of sly aristocratic ladies, too.

Pater really cuts loose as he continues.  The following passage, the most famous in the whole of Pater's oeuvre, is so purple it would probably embarrass Prince in his Purple Rain period.  But Pater makes his point:
She is older than the rocks among which she sits; like the vampire, she has been dead many times, and learned the secrets of the grave; and has been a diver in deep seas, and keeps their fallen day about her; and trafficked for strange webs with Eastern merchants: and, as Leda, was the mother of Helen of Troy, and, as Saint Anne, the mother of Mary; and all this has been to her but as the sound of lyres and flutes, and lives only in the delicacy with which it has moulded the changing lineaments, and tinged the eyelids and the hands. The fancy of a perpetual life, sweeping together ten thousand experiences, is an old one; and modern philosophy has conceived the idea of humanity as wrought upon by, and summing up in itself all modes of thought and life. Certainly Lady Lisa might stand as the embodiment of the old fancy, the symbol of the modern idea.

Pater has started writing about the figure in the painting as if she were an actual person, a kind of immortal who has lived through the ages and accumulated innumerable experiences, but what he's really doing is saying that the kind of beauty Leonardo has created is the synthesis of a long historical tradition, a traditin that includes Byzantine influences (those "Eastern merchants"), classical Greece (Leda, Helen), the art of the Christian middle ages (Mary) and of the gothic (vampires).  The coming together of all these forms of beauty into a grand historical synthesis represents, for Pater, a kind of culmination, and the creation of a truly modern form of beauty rooted in a rich and various past.

Which brings us to Jehnny Beth.  Beth, born in France as Camille Berthomier, has for the past two years been synthesizing and embodying a whole history of rock performance in exactly the manner Leonardo's Gioconda embodies a history of artistic modes of beauty.  Critics have caught on to the fact that Beth's is a complex charisma, and one that draws on a lot of sources.  She's been compared to Siouxsie Sioux, to Johnny Rotten in his Public Image Ltd. phase, to Curt Cobain, to Lou Reed, to Serge Gainsbourg, and to many others, even Johnny Cash.  More often than not she's been compared to men rather than women, which I think is significant: the tradition she's embodying isn't so much that of the female lead singer as chanteuse as it is that of the rock front-man—a stage presence as much as, or more than, a voice, and a presence that doesn't rely on a kittenish sex appeal, but on one or another kind of swagger.  Woman have done this kind of thing before (Courtney Love comes to mind) but so far it's been predominantly a boy's sport, though clearly one Jehnny Beth has mastered at a major league level.

Consider this performance of the song "Shut Up," nicely shot by director Giorgio Testi.  I recommend skipping to the 1:15 mark, after the long spoken introduction, and watching Jehnny Beth's arms, posture, neck and eyes.  The angular, restricted poses and arm movements come right out of the repertoire of the late, great Ian Curtis of Joy Division, and have all of that stiff anti-swagger swagger he understood so well.  The foreward projection of the neck and the eyes that shoot to the side are familiar, too, though not in combination with the Ian Curtis moves: we've seen them before as the signatures of Green Day's Billie Joe Armstrong:

Or consider this, the John Minton directed video of the Savages playing "Husbands."  If you don't see and hear the influence of Patti Smith's "Horses" when we get to the repeated word "husbands," I'm going to have to send you to the back of the class in the school of rock.  There's a lot more going on than a Patti Smith homage, but Smith is clearly rolled into the mix:

Jehnny Beth's background is in acting and performance, and she was classically trained in these fields at the Conservatoire à rayonnement regional de Poitiers.  This shows, I sense, in the studied way in which she has assimilated the movements and gestures, as well as the vocal styles, of her predecessors.  If it's pure originality you're looking for, you've come to the wrong place.  She's not one of that cadre of artists Ezra Pound called "the innovators"—the makers of new techniques.  She belongs, instead, to the group Pound called "the masters"—those who assimilate and synthesize.  And it is precisely this that makes her the Gioconda of rock.