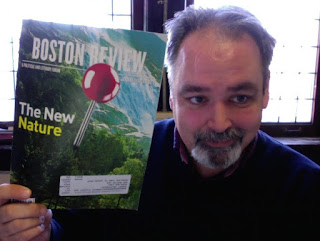 There are two pieces of mine available in the Boston Review, the first, "A Strange and Quiet Fullness," is about Charles Simic's poetry and prose, and begins like this:


Shop windows empty except for a dusty mannequin or a boy's suit long out of style; abandoned city streets; a seedy magician doing his threadbare act in an unpopular theater; a fat fly in a matchbox clutched by a lunatic—Charles Simic has been the primary purveyor of images like these in American poetry for close to half a century, importing them from some mysterious region rumored to lie somewhere between the former Yugoslavia and the monstrous mountain passes of Simic's private dream kingdom. A specialist in the uncanny, in objects removed from explanatory contexts, in stories gestured at but left untold, Simic describes his orientation as cosmic rather than historical or natural. He distrusts the tribalism inherent in history, with its chains of "begats" and its stockpiles of grievances, and he sees a direct link between the Romantic idealization of nature and a dangerously naive utopianism. He would rather reach beyond history and nature to deep enigmas of the cosmos itself—"the brain-chilling infinities and silences of modern astronomy and Pascalian thought." He finds unsettling enigmas not just in the vastness of space, but in the scenes and objects nearest to hand. When Simic looks at it, even a dog heading up the walk with the newspaper in his mouth becomes eerie and touches on an aspect of infinity.

The irony is that this turning away from history to the cosmic is itself the product of history, of the collision of Simic's life with some of the most brutal events of the past century. A child of war-ravaged Belgrade, Simic tells us "I've seen tanks, piles of corpses, and people strung from lampposts with my own eyes." Although they could not have known it, Hitler and Stalin were, according to Simic, "hatching an elaborate plot to make me an American poet." There is a truth to this, and not just a truth about Simic as an immigrant to the United States: Simic's commitment to lyric poetry has everything to do with a skepticism about the certainties of ideologies, whether of the right or the left; and his orientation toward the cosmic and the uncanny comes, too, from his traumatic childhood...

At the moment it's available only in the print edition, but will be online soon. UPDATE: HERE IT IS ONLINE.

The other piece is up now on the Boston Review website.  It's called "Meditations on Embodiment," and discusses the work of Swedish artist and writer Karl Larsson, whose Form/Force I listed as my "book of the year" for Partisan magazine.  It begins like this:


A Mexican man sewn into a car seat to confound American border guards; the published prison memoirs of leftist German revolutionaries; the destruction of ancient statues in Iraq: what do these things have in common? What about the nine tracks of a Joy Division concert recording, the rubble where two great statues of the Buddha once stood in Afghanistan, and Andy Warhol’s interminable experimental film Sleep? They all provide rich material for Karl Larsson’s meditations on embodiment, on the ways bodies, artworks, and texts enter the material world and maintain or lose presence there.

It shouldn’t surprise us, given these concerns with spatial experience, that Larsson is both a poet and a visual artist. As a sculptor and installation artist, he has exhibited extensively in Europe, especially in his native Sweden, and taken a keen interest in both the physicality of texts—palimpsest, erased, and overwritten writing is a favorite theme—and the ways in which bodies interact with environments.


Finally, in Toad Suck Review, you'll find some translations of the lovably weird Garbriel and Marcel Piqueray, midcentury Belgian Surrealists I've been reading forever.  It's a series of poems called "The Sproks," and you can read the whole thing in Toad Suck Review (I love typing that title), or check out a few of them here. 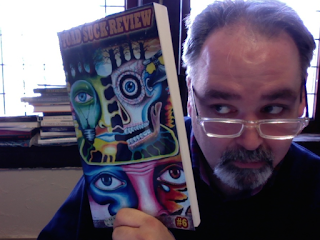 Posted by Archambeau at 2:26 PM No comments: