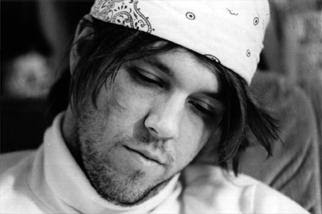 It's been long enough for the news of David Foster Wallace's death to sink in. He died right around the time Reginald Shepherd died, and I never really let myself feel the loss, since Shepherd had meant so much to me. Since then I've spent some time rereading DFW, and I'm finding the writing full of sentiments I never noticed before. Of course when a writer commits suicide, any mention of depression or suicidal thoughts will stand out when one goes back to the writer's work. But the surprising thing for me is how often I now see even DFW's comic writing as overwhelmingly sad. Here, for example, is a paragraph from the long title essay of A Supposedly Fun Thing I'll Never Do Again, a piece where DFW satirizes the cruise-line industry:

There is something about a mass-market Luxury Cruise that's unbearably sad. Like most unbearably sad things, it seems incredibly elusive and complex in its causes and simple in its effect: on board the Nadir — especially at night, when all the ship's structured fun and reassurances and gaity-noise ceased — I felt despair. The word's overused and banalified now, despair, but it's a serious word and I'm using it seriously. For me it denotes a simple admixture — a weird yearning for death combined with a crushing sense of my own smallness and futility that presents as a fear of death. It's maybe close to what people call dread or angst. But it's not these things, quite. It's more like wanting to die in order to escape the unbearable feeling of becoming aware that I'm small and weak and selfish and going without any doubt at all to die. It's wanting to jump overboard.

When I first read this, back in '97, I took it as biting satire. But now I see in it the meditations of someone who'd become, of necessity, a kind of connoisseur of his own implacable sorrow.

Posted by Archambeau at 2:04 PM No comments: