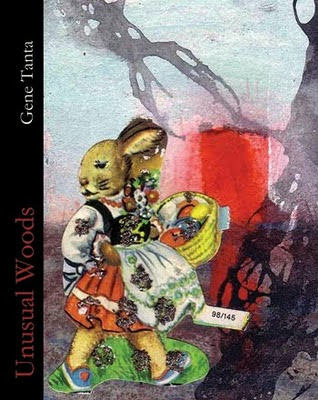 Whose woods these are I think I know: they're Gene Tanta's, and they're strange, or at any rate unusual.

Yes, people, it's time to celebrate the appearance of Gene Tanta's new book Unusual Woods, just out from BlazeVox. Gene's an interesting guy: born in Romania, he arrived on our shores in the 80s, and has been spending his time writing poetry, drawing, painting, and hosting Chicago's own "Writing at the Movies" — a writing shindig inspired by the old Surrealist game of moving from one movie theater to another, making one's own show in the process (you can just see the straight line leading from Breton's Surrealism to the Situationism of the "dérive" and "détournement," can't you? It's a line that also leads straight through Gene Tanta's apartment).

Anyway. Here's the blurb I wrote for Gene's book:

Where are we, in Gene Tanta’s Unusual Woods? We’re where Charles Simic would live, if he’d been born a few decades later, under the signs of ellipsis and disjunction. These are woods with at least two borders running through them. The first of them divides the surreal anecdote from the elliptical meditation, and along this border we find deformed aphorisms, slippery allegories, cryptic personifications, and parables bent out of shape and away from meaning. This is a zone filled with almost-expressive artifacts like faceless dolls and faded photos. The second border runs between Tanta’s Romanian past and his American present. Both Eastern Europe and the United States appear in fragments of iconic figures: Stalin, fortune-tellers, gypsies, elders with samovars, spies, and Paul Celan; or Black Hawk Indians, Gulf War veterans, teenagers dancing the funky chicken, and Ernest Hemingway. No one but Tanta lives at these exact poetic co-ordinates. You’d be wrong not to visit.

Check out the Blazevox site for Unusual Woods, or cruise by Amazon.com, or see the online gallery of Gene's artwork. He's good.
Posted by Archambeau at 9:55 AM 1 comment: