"She's So Cute!" The Aesthetics of Parenthood 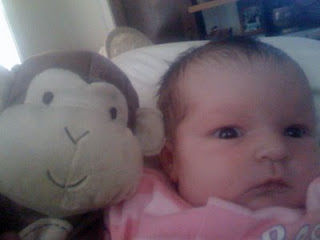 "She's so cute!" I've been hearing a lot of comments like this lately from people who've seen my two-week old daughter Lila (that's her on the right). On the one hand, I totally agree: Lila's about as adorable as they get, and anyone who sees that makes me happy. On the other hand, the uptight prof in me wants pull out a pen, reach up into the big speech-bubble over the comment-maker's head, circle the comment about cuteness in red ink, and write "tautology!" in the margin. I mean, it's not just that babies can be cute: there's a real sense in which they are the Platonic ideal of cuteness, and everything else we think of as cute is cute only inasmuch as it resembles a baby. It's not that my baby is cute: it's that cuteness is like my baby. Cuteness is a manifestation of what she is, not the other way around. "Cute's so her!" would probably be the appropriate exclamation.

There's a biological basis for all of this, and thanks be to the gods of Google I was able to dredge up a vaguely-remembered New York Times article by Natalie Angier on the Darwinian core of cuteness from a few years back:

Scientists who study the evolution of visual signaling have identified a wide and still expanding assortment of features and behaviors that make something look cute: bright forward-facing eyes set low on a big round face, a pair of big round ears, floppy limbs and a side-to-side, teeter-totter gait, among many others. Cute cues are those that indicate extreme youth, vulnerability, harmlessness and need, scientists say, and attending to them closely makes good Darwinian sense. As a species whose youngest members are so pathetically helpless they can't lift their heads to suckle without adult supervision, human beings must be wired to respond quickly and gamely to any and all signs of infantile desire.

So sure. One can certainly see how natural selection worked in creating our affection for the cute. I mean, those who don't have a strong, positive response to the aesthetics of cuteness (who don't, to cite the lyrics of the Talking Heads song "Stay Up Late," respond to "little feet-feet, little toes") probably didn't show much enthusiasm for the fluid-spewing, squeal-making products of their procreation. In disproportionate numbers they stalked out of the cave, leaving their offspring to the mercies of the saber-tooth tigers, thereby removing themselves from the future gene pool.

But moving from biology to aesthetics, one wonders just where cuteness fits in the great scheme of things. Edmund Burke's Philosophical Inquiry into the Origin of our Ideas of the Sublime and Beautiful comes to mind as good a place as any to start, at least if you're too groggy from late-night baby feedings to feel up to dealing with Kant. Chief among the virtues of Burke's book is a handy comparison and contrast of two types of aesthetic experience: the sublime and the beautiful. It goes something like this:

-Is vast in scale. (Ever stood at the edge of the Grand Canyon? That sort of thing).
-Appears rugged and negligent. (I think it's the idea of immense force that matters here: again, think of the Grand Canyon).
-"Loves the right line, and when it deviates it often makes a strong deviation." Think of the gravitas of Mies van der Rohe's architecture: there's no whimsy here, no Frank Gehry crazy curves.
-Is dark, gloomy, solid and massive. (Again, think Miesian school architecture. All those classic Chicago buildings in the Miesian mode are big, black, imposing things).

-Is comparatively small (with reference to the sublime).
-Is smooth and polished.
-"Should shun the right line, yet deviate from it insensibly" (you know, the serpentine curve and all that. The eighteenth century engraver Hogarth actually wrote a slightly nutty treatise on how the serpentine curve was the very essence of beauty).
-Is light and delicate.

If we can generalize about the difference between the sublime and the beautiful, it's that the sublime is in some sense superior to us: it is bigger than us, stronger than us, has more gravitas than we do, and embodies forces that could destroy us, if they bothered to take notice of us. The beautiful, though, we meet on more equal terms. It pleases us, without overwhelming us or trying to be ingratiating. But where would the cute fit in this scheme? On this point Burke is silent. But not me! Here's how I see it:

-Is tiny.
-Is soft and possibly a bit squishy.
-Is rounded or even pudgy, rather than elegantly curving or austerely straight.
-Is vulnerable, or at the very least non-threatening. Even perky.

It's just a step further down the continuum that led us from the sublime to the beautiful: if the sublime is superior to us, and the beautiful our relative equal, the cute is in a meaningful sense inferior to us. It is no threat to us, like the sublime: in fact, it calls out for our protection. Not awe so much as "awwww!"

So someone like Nicole Kidman is (no surprise here) beautiful: delicate, exquisite and all that. And someone like Renée Zellweger is more cute: big round forehead, big eyes, a little vulnerable-ish. Although for the full-on pure cute, you'd have to go more Shirley Temple: the cute and the juvenile go hand in hand. One wonders if people can actually be sublime. I mean, sublimity is superior to us, and so one thinks of it as belonging to the gods, or to nature, or to grand creations. It must, says Burke, excite "ideas of pain and danger." Maybe some kind of dominatrix, though certainly not Ms. Kidman as Catwoman. There's too much kitsch in that character, and, while failed attempts at the sublime often end up being kitschy, there's no kitsch in the sublime proper. 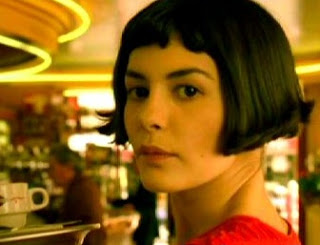 While the sublime, the beautiful and the cute are ideal types, as actually embodied they can, of course, be mixed. As Burke puts it, "In the infinite variety of natural combinations, we must expect to find the qualities of things the most remote imaginable from each other united in the same object." One thinks here of the movie Amélie, in which two characters (actually two figures in a photograph who suddenly start talking — the movie's trippy that way) debate whether the eponymous heroine, played by Audrey Tautou, is "belle or "jolie" (that is, whether she's beautiful or cute). They can't quite come to a conclusion, no doubt because Tatou (especially when done up as Amélie) embodies elements of both the beautiful and the cute. I mean, there's something elegant in her jawline, and something grave in her coloration, that offsets the big eyes and perky haircut that argue for cuteness. Let us savor all this a moment. Ahem. Yeah. 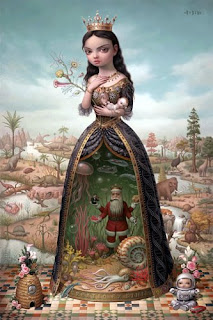 So anyway: what about the possibility of a cute/sublime hybrid? Could such a thing exist? I can't think of a lot of artists who go for this effect, except maybe for Mark Ryden. I mean, he combines big space, the idea of the vastness of time, vaguely religious iconography and the like with chubby cheeks and big eyes. Does it work? You be the judge. I've got to get things done so I can go home and play with my baby's feet. They're the very essence of cuteness.

Posted by Archambeau at 9:20 AM No comments: