In a better world, you'd have been awoken this morning by the shouts of MFA students moonlighting as early-twentieth-century style knickerbockered newsboys and roaming the steets hawking copies of the new issue of Pleiades (vol. 28 no.1). But in the current sad state of affairs, you'll have to haul yourself down to the local bookstore and grab a copy off the obscure shelf where literary journals are hidden (let's blame the Bush administration, or the real estate bubble, or the academy, or Ron Silliman: you know, the usual fall-guys).

Anyway, the issue is as laden as ever with good stuff. I was particularly glad to see new work by poets I follow (Albert Goldbarth, Steve Burt) and a solid review of a poet I root for (Piotr Gwiazda). Mike Theune, who seems to have become a regular contributor of long critical essays, is here too, with an essay called "Writing Degree ∞," which continues Pleiades' tradition of running not only reviews but essays about larger issues.

Rubbing shoulders with this distinguished company is your present humble blogger: my retrospective treatment of Reginald Shepherd's poetic career hulks around in the back pages. Here's how it starts:

on Reginald Shepherd’s Some are Drowning, Angel, Interrupted, Wrong, Otherhood, and Fata Morgana


Philoctetes, sadly, has never been a favorite character of Greek legend. He gets only a brief mention in the Iliad, and missed his chance for greater acclaim when the last manuscript of Proclus’ Little Iliad, where he may have played a greater role, was lost to history. The Greek tragedians liked him — he’s the subject of a play by Aeschylus and another by Euripedes, and two by Sophocles — but their audiences didn’t fall in love with any of these plays, and history has been unkind to the manuscripts: only one full Sophoclean script remains, along with a few lines of the other. The Aeschylus and Euripedes have fared even worse: neither has been preserved, even in fragment. When Edmund Wilson surveyed the history of the Philoctetes story in The Wound and the Bow, he found it left surprisingly little trace in literary history: a bungled seventeenth-century French play by Chateaubrun, a chapter of Fénelon’s Télémaque, an analysis by Lessing, a sonnet by Wordsworth, a John Jay Chapman adaptation, and a version by André Gide. The six decades since Wilson’s survey have added little to this short list: mentions in Derek Walcott’s Omeros and Seamus Heaney’s The Cure at Troy, and a few short poems by Michael Ondaatje are the only distinguished examples.

If your big-box bookseller doesn't have copies, hold your breath until they cave in and get them. Or just wait for the newsboys to make it to your street. Your call. 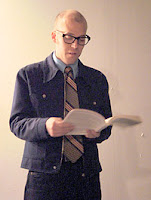 In other news, Patrick Durgin (my co-conspirator in putting together the Chicago MLA off-site poetry marathon) has interesting things to say about Rachel Blau DuPlessis. His comments are in the online-only Jacket Magazine, though, so the newsboys on the corner will be of no use to you, unless you're churlish enough to wrest the laptops from their urchinlike hands. Which I don't put past you, really. For shame!

Posted by Archambeau at 7:43 AM No comments: