Being, Becoming, and Fatherhood 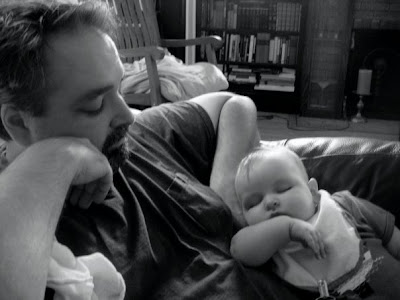 [Warning: this post is much more about me and my life than my usual posts are. I don't blame you if you want to go read something else.]

Back when I was in grad school, I used to carpool from Chicago to my teaching gig at Notre Dame with a lanky guy who got his news from Fox, his opinions from Rush, and his general outlook from a hybrid of Nietzsche and Pentecostalism. It made for some interesting rides, as we argued our way through the post-industrial wasteland of northern Indiana, especially since he had little patience for the commute and an uncanny ability to talk his way out of speeding tickets, drawling long, slow explanations to the cops from behind his aviator shades. He was in his thirties, about a decade older than I was, and, when we would reach a particularly impassible point of fundamental disagreement, he'd sigh, lower those shades, look over at me from behind a speedometer that hovered up near the triple digits, and say "Well, Archambeau, you're young. You'll see it my way when that women is fool enough to marry you and you have kids." I've had to wait a long time to see for myself whether his dire prediction would come to pass, but nine months into this fatherhood gig I'm willing to crawl out on a limb and say he was just fucking wrong.

Generally, I've found the predictions about fatherhood to be kind of off-base. It hasn't been as hard as some people told me it would be. One colleague — a man predisposed by my bitching and moaning visits to his office to see of me as rather thin-skinned, or as something of a delicate orchid — was particularly stern in his warnings about the implications of having a child. "Look," he said, "right now you live in a pleasure dome, a palace of pleasant breezes, but when the little one comes, all that will change," here he would sigh, and look out the window in the general direction of his dilapidated Victorian house, his three kids, and a wife best described as "difficult." "When the little one comes," he'd continue, "the pleasure dome will be forever destroyed, and life becomes a desperate holding action, carried on against superior force." He wrote a lot about the literature of the Vietnam war, and I think it crept into his metaphors. Anyway, fatherhood hasn't felt that way for me, maybe because I'm now at a point when Valerie and I can afford to have some help raising the kid, and maybe because we got very, very lucky in the nanny-hiring lottery.

Other predictions have proven false, too. Apparently you can still go out to the movies, and you can still discover new music while doing the parent thing. Again, this may have something to do with not being a penniless twenty-something itinerant poetry teacher at this point in my life.

But there is one significant way that fatherhood has changed things for me. It's not just that I've had different experiences (a closer acquaintance with baby feces than had heretofore been the case, say, or a different relation to sleep, or a constant astonishment at the stream of firsts — waves, smiles, rollings-across-the-floor, etc.). I think there's a different orientation to experience. I don't mean that this is better or worse than my non-kid-having orientation to experience —I hate the smugness of some parents I've met, who seem to think that the only path to complete humanity lies through the raising of urchins. I thought that was wrong during my long childless period, and I think it's wrong now. But I do think that, at least for me, there's a different relation to the world now.

Maybe I've spent too much time reading Hegel (in fact, scratch the "maybe" there) but I think the best way to get at the nature of this different way of experiencing the world is through the contrast between the idea of being and the idea of becoming. Here's the deal: by the time my daughter was born this past February, I'd pretty much reached a point of stability in my life. I mean, I'd finished grad school, landed a teaching job, made tenure, and been promoted to full professor. I'd found the one woman on earth capable of dealing with my bullshit in a loving and affirming way, married her, and we'd been together in wedded bliss for sixteen years. We were settled into a house, into our sets of friends, and our careers (she's the one with the Big Deal job, by the way). I'd had a book or two published, and felt about as professionally established as I'd care to feel. All that was done, and didn't loom before me with the kind of urgency I feel when I get emails from former students hungering for the dream job, the back yard, the right guy, or whatever. It didn't feel like a rut — it felt a lot like fulfillment. And there was always something new happening in terms of whatever I was intellectually engaged with. But I was more or less who I was going to become, and the texture of life from one season to the next, one year to the next, was sort of the same. It was easy, too, which is both good and bad, I suppose.

All this was a matter of being, not becoming. Think about it: the protagonists of folklore or mythology don't change: they are what they are, they have the traits they're going to have. They have new adventures, but they don't experience fundamental changes. It's true for modern folklore, too: whenever I try to explain this stuff to students, I say that James Bond is the a creature of pure being, rather than becoming. Sure, we often see him doing some training exercise at the beginning of the movies, but he's not striving to become something he's not: he's maintaining his general awesomeness. He is what he is: a hyper-resourceful adventurer and ladies' man. He couldn't be more different from, say, the protagonist of the nineteenth-century bildungsroman. The lead characters in those books are all about change and growth. The reason so many of those novels are named after the protagonist (Jane Eyre, Huckleberry Finn, etc.) is that the protagonist is where the action is: he or she will grow, evolve, and learn. By contrast, Bond movies are often named after villains (Dr. No) or love interests (Octopussy) or whatever. In the world of becoming, you don't have a stable, ordinary world that you venture out from to have your adventures (the way 007 had headquarters with M and Moneypenny, or the way pre-kid-havin' Archambeau had the comfortable little bubble from which he'd make forays into weird books of poetry and obscure works of theory). In the world of becoming, you don't have a stable place or a stable identity: you're on the road, in motion, and evolving all the time.

The thing about having a kid (and I imagine many of you know this better than I do) is that it throws you straight into the whirlwind of becoming. I mean, a kid is all change, all becoming, all the time: it seems Little Lila has a new paradigm of behavior and a new set of skills every week, a new emotional climate every two weeks, and a new wardrobe every month. And she's plugged directly into my life, so I'm always adapting to this, and becoming different along with her. I mean, take something as simple and straightforward as the way the house is arranged. Before Lila came along, the only real changes in the house came about for aesthetic purposes ("let's re-arrange the ceramics on the mantlepiece, or find a place for the new thingy we scored while antiquing, or let's figure a way to get that pile of books off the floor," that sort of thing). Now, the house is in a constant flux: bassinets and baby swings came and went, followed by bouncy-chairs and play-pens, which were followed in turn by a wholesale revamping of the sunroom into a colorful, rubber-tiled, toy-strewn Zone du Kid. It's not a house in a state of being, it's a house in a state of becoming. And that's just the surface: the three-character dynamic of mom, dad, and kid is in constant flux to accommodate Lila's ongoing miraculous transformations. It's different from the old two-character act, which we had down, people, down. Now it's more like improv comedy. All becoming, all the time.

But that doesn't catch everything about the nature of the change in how one relates to experience. There's something different, which we might be able to get at with Nietzsche rather than Hegel. Remember Wim Wenders' wonderful movie Wings of Desire? I always thought it had a lot to do with Nietzche's ideas of Apollonian and Dionysian experience. In the beginning, we follow some angels through Berlin: they look like regular people, but drift unseen through the city, standing near people and hearing their thoughts. There's a great scene where the angels do this in a library, walking past readers and hearing their reflections on what they're reading. The angels feel deeply, and understand, but have no other connection to the world or the people they see. They're distant, understanding and appreciating the world but not really being engaged with it. They have nothing at stake in the struggles of the world, no self-interest or group-interest to protect. This is Apollonian stuff, all self-possession and aesthetic distance. I think of my pre-Lila life like this. But when she was born, I felt like the angel in the Wenders film who chooses to become human, to enter the world of time and change and to lose the distance of the Apollonian, angelic perspective. Suddenly, the angel finds himself a part of what he had observed, with something at stake, with things to protect and with the urgent need to shelter those for whom he cared most. The collapse of Apollonian distance was complete, and he'd been absorbed into the world — a good portion of the Dionysian experience, really.

I don't mean to place one mode of experience above the other (Wenders doesn't, nor does Nietzsche, though Nietzsche did seem to think that the fusion of the two modes of experience in Greek tragedy was a higher form of experience). But I do think there's a sense of engagement that comes with having a kid that's different from the generally aesthetic, semi-disinterested way of experiencing things I had going on before. Maybe it was an awareness of this that made my old carpool partner think I'd change my politics when I became a father. Though how you could get from the world of becoming and the anti-Apollonian stance to Rush Limbaugh is as much beyond me as is the secret of making cops back off when they nab you for speeding.