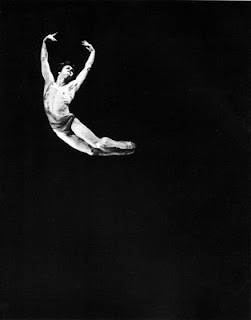 Last Monday a suddenly-opened car door had a disagreement with my bicycle about the nature of my forward trajectory. "Slow and steady, okay?" said my bike. "No! Rapid, airborne, and ending with a thump!" said the car door. The car door won. I'm alive, but spent some time in hospital, where I overheard one of the doctors looking at my x-rays say "it looks less like a bone than a box of rocks." So, long story short, it'll be a number of weeks before I'm putting any weight on my leg at all, and I won't be back to leaping-and-tumbling form until late November or thereabouts.

What, you ask, are you going to do to get your Archambeau fix, since you can't lurk outside my house to see me doing my usual ballet and acrobatics routine as I go out to pick the newspaper off the driveway (full disclosure: I actually look more like a staggering Tony Soprano when I do this, but let's imagine a Baryshnikov-Archambeau, for maximum contrast).

Well, there are a couple of options. You could pick up the latest Boston Review, which contains, among much else, "Double Gesture," a big review I wrote about the evolution of Swedish poetry over the generations (long story short: it goes from existentialism to a kind of post-structuralist linguistics inflected style, and Fredrik Nyberg is really, really good).

Alternately, you could tune in to the June 25th broadcast of American Public Media's show "Speaking of Faith." If your time machine is low on batteries, you can get to the show as a podcast and accompanying web site. The theme of this particular episode is fragility, and I translated an old French poem on the theme, "The Broken Vase" by Parnassian poet Sully Prudhomme. I'm not normally keen on the anti-Romantic, Neoclassical Parnassians — I've always agreed with Gerard Manley Hopkins about Parnassian poems being "spoken on and from the level of the poet's mind" rather than from those strange moments when "the gift of genius raises him above himself." So I took the Prudhomme translation as an opportunity to try to inhabit a very different kind of poetry than the sort I'm usually drawn to. And it was an interesting challenge, trying to maintain the rhyme scheme and something of the rhythm of the original. Audio files of the poem in French and in my translation are up, read in the fabulous, tobacco-cured voice of Jean-Luc Garneau.

Posted by Archambeau at 10:24 AM No comments: