Beyond Close Reading and the G.I. Bill: A Secret History of the New Criticism 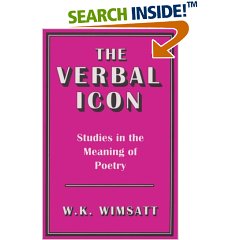 What's that you say? You can't make it down to Tulsa, Oklamoma next week to hear me talk about the New Criticism and read my poems at the eighth annual Modernist Studies Association Conference? You're kidding! What are we going to do about this terrible state of affairs? Oh, come on. No whining. Okay, fine. But only since you insist. Here's the paper I'm giving.

If any of you ever want to cite it in some dusty academic article, or perhaps attack it in a firey editorial, you can pretend you were in Tulsa and give it the full treatment:

The essay is based on some material I was asked to eject, as irrelevant to my main argument, from the Laureates and Heretics manuscript. I did so at the behest of the very sharp and well-informed anonymous reader evaluating it for the press, a reader I'm increasingly convinced has to be Keith Tuma (J'accuse, Keith!).

Oosh. I just realized that I'll have to come back to this post and fix all the formatting errors my cut-and-paste job is sure to introduce. No italics, and no footnotes will appear (and some of the "works cited," will seem irrelevant, as the works were cited in the footnotes).If you're reading this in 2008 and the italics still haven't reformatted, odds are I've given up on actually getting around to the task.

Anyway Here it is:

Posted by Archambeau at 7:41 PM No comments: