Dreamsongs: Mine and Berryman's 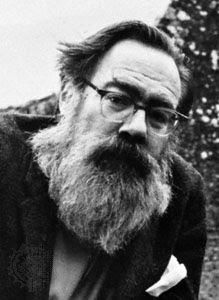 The latest Cultural Society is up online, thanks to the efforts of the indefatigable Zach Barocas, who deserves some kind of medal for getting his editing done while relocating from Minneapolis to New York. Marring the very fine list of contributions is my own effort, "Nawlins Dreamsong Late ’08." The poem makes a big deal about insisting it is based on real events, and it is based on real events. But I can do nothing without a text, and the poem is also based on John Berryman's "Dream Song 15," which sprang into my mind while the events recounted in the poem were going on. I'm not entirely sure why, though I suppose it had to do with the sudden manifestation of the weirdness of the bits of speech encountered in each poem.

Anyway, in recognition of the debt to Berryman and his persona-driven dream-theater, here's his poem, which is truly fabulous, if pretty dark. The Chicago woman's words — "kiss my ass, that's what you are" — are the kind of poetry of everyday life that doesn't get preserved often enough:

Let us suppose, valleys & such ago,
one pal unwinding from his labours in
one bar of Chicago
and this did actually happen. This was so.
And many graces are slipped, & many a sin
even that laid man low

but this will be remembered & told over,
that she was heard at last, haughtful & greasy,
to brawl in that low bar:
'You can biff me, you can bang me, get it you'll never.
I may be only a Polack broad but I don't lay easy.
Kiss my ass, that's what you are.'

Women is better, braver. In a foehn of loss
entire, which too they hotter understand,
having had it,
we struggle. Some hang heavy on the sauce,
some invest in the past, one hides in the land.
Henry was not his favourite.

That sense of a lost innocence in the third stanza is as strong here as it is anywhere in The Dreamsongs. And this poem's got the added emotional oomph of that sad, scrappy underdog thing. I like to think the whack-job language in my poem is some kind of cousin to what Berryman had going on, but my "Nawlins Dreamsong" has none of the emotional depth on display in Berryman's poem. Maybe I make up for some of the lost ground with a few allusions, but this is clearly Berryman's game being played here, not mine. I just wanted to pay my hommage.

Posted by Archambeau at 8:43 PM No comments: