Because it Matters: Some Politics 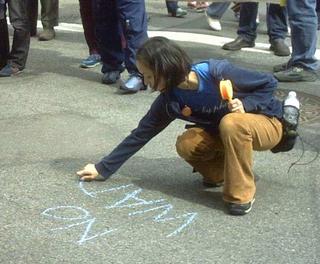 Democracy for America, an outfit I've supported for a long time, has started an online pledge to send a message to candidates in the upcoming congressional elections. It's worth a look. The essence of it is this:

I pledge to only support candidates who:

Acknowledge that the U.S. was misled into the war in Iraq.

Advocate for a responsible exit plan with a timeline.

Support our troops both at home and abroad.

I take "supporting our troops" to mean "wish them well, and well-cared for, and safe at home when war is not absolutely necessary." Some of my best students, as well as many members of my family, have been in the military, and (tenured radical or not) I've got a lot of respect for them. And their opinions about this war have been interesting. I remember talking with a student after my Irish lit class around the time Bush &Co decided to invade Iraq. He'd been a Marine lieutenant in Somalia during the whole "Black Hawk Down" fiasco, and he predicted the course of action we've seen with tremendous accuracy. We'd be stuck in Iraq, he said, with no way out and no way to win and no meaningful support from the people we were told we were helping, and every now and then a helicopter would go down or a patrol would be ambushed or a bomb would go off and a few more Marines would die. I wish Bush would interview soldiers who hadn't been screened by PR aides and given scripted lines. But there's not much chance of that.

The pledge is particularly important at a time when too many Democrats continue to refuse to take a stand on Bush's war. Representative Rahm Emanuel, chair of the Democratic Congressional Campaign Committee, for example, was recently on NBC saying that Dems must avoid calling for an exit strategy. We can't let people in the Democratic party continue to take the anti-war vote for granted.

Anyway. When you sign you're given the chance to type in a few words about why you're signing. I went a little overboard, and wrote this:

I am signing because I believe that members of the Bush administration systematically propagated lies about the need for a war in Iraq, that they proceeded against their own best intelligence, that they acted without a responsible plan, and that thousands of combatants and non-combatants have died needlessly due to the arrogance of a powerful few. I am signing because too many Democrats have remained complicit with a failed administration, and because Republicans need to know that the current administration's policies are unacceptable, regardless of party affiliation. I am signing because history will show that those who stood silently by while this war continued failed in that most essential of tasks, citizenship.

Signing takes about a minute, and it matters.

On a happier note, Chris Glomski's new book Transparencies Lifted from Noon arrived unexpectedly today. Must blog about him, and about Jim Behrle, another poet I've been admiring lately.