Nothing in this Life: Nick Cave Among the Poets 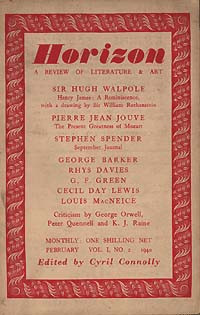 The wonderful literary journal Horizon Review has, I've been told, suffered the inevitable fate of most wonderful little journals, and come to an end.  It's inaccessible now, the issues disappeared, the website gone dark—all very sad, since the affair began with great promise.

Since it's no longer available, I'm posting my own contribution to a 2011 Horizon, an essay on Nick Cave and poetry called "Nothing in this Life."  It will appear in somewhat different form in The Poet Resigns: Poetry in a Difficult World, a book of my essays that will come out later this month.

A pair of young poets once approached me and asked if I’d like to contribute to an anthology they were editing.  I write prose quickly, but I’m a slow poet, and don’t keep much ready-to-publish material on hand, so I was a bit wary.  “What’s the theme?” I asked, as a series of possibilities for an anthology in which I might belong flickered through my head. Rapidly graying poets? White guys who could lose some pounds?  The last generation of poets to get on the tenure track before the general derailment of academe?  It turned out to be none of the above: the young poets wanted to put together an anthology of poetry inspired by Nick Cave.
When I mentioned the project to the Scottish poet Roddy Lumsden, he didn’t miss a beat.  Nick Cave?  Lumsden had written a poem for Nick Cave and, through a series of events too complex and unlikely to present here, he’d heard from an octogenarian friend who’d lunched with Cave that the great man himself had pored over the little chapbook in which the poem appeared—pored repeatedly, apparently fascinated, but inscrutable.  There seems to be some special connection between Cave and the poets, and I think I know what it is.

*
If we ride that same train a few more stops, we arrive at the early concerts given by Nick Cave and The Birthday Party.  I was too rusticated in the provinces to see them, and too young to get in even if I'd been in the right places.  But Duane Davis, the great bearded guru of rock history and presiding spirit of Wax Trax Records in Denver, Colorado, was kind enough to clue me in about those shows.  Here's what he said about them in Waste Paper #30 some 20 years ago, in prose he has since come to see as a bit hot-house (“I was deep in the grip of Bataille and Baudrillard,” he told me, when he sent his article my way):

The intensities of experience, the desire to act out a daily suicide in the face of an uncertain and questionable re-birth, the compulsion to burn away all the wicker of the socially woven masks our families and communities demand we wear, the immersions in pain and pleasure that take brute feeling past all points of endurance and the arrogance of total marginalization, the refusal of a Utility that measures the individual only to determine his/her productive capacities: somehow Cave has survived all this -- and more: is still searching for a performance that is a language at once private, personal and interior that can be understood by the audience, the Other, that haunts his darkest, most solipsistic, nightmares.

That's the Romantic stuff: implacably opposed to the modern, utilitarian world, and acting out its alienation in intense, dark ways.  “Everything that was him is mere charcoal and waste;” says Davis, “what is left standing is monstrous and alien.”  This is Cave as Childe Harold, as Frankenstein's monster, as Baudelaire's disheveled nighttime-wanderer in the city streets.
Unlike a lot of rock Romantics, Cave never really left that alienation behind.  Instead, he made it the bedrock of his career.  Consider the lyrics to “There She Goes, My Beautiful World,” from Nick Cave and the Bad Seeds' 2004 double album Abattoir Blues/The Lyre of Orpheus, a song I've chosen more or less at random (it came on my iPod Shuffle when last I hit the treadmill).  The song makes all the big Romantic gestures.  Here's the opening:
The wintergreen, the juniper,
the cornflower and the chicory,
all the words you said to me
still vibrating in the air.
The elm, the ash and the linden tree,
the dark and deep, enchanted sea
the trembling moon and the stars unfurled
there she goes, my beautiful world,

Well, it's certainly cryptic—the opening imagery is a bit hard to parse, but I do think there's a unifying theme to it.  Cornflowers were traditionally worn by young men pining for love, the idea being that their hopes would wither with the flowers.  Chicory was used in times of deprivation to substitute for coffee, and wintergreen was similarly used as a substitute for tea.  And the juniper?  Well, it was in a juniper tree that the prophet Elijah found shelter.  So we're dealing with a time of deprivation, a time when we need shelter and sustenance to get by.  The notion of the prophet in hard times is important, too: as we'll see in lines to come, the thing that Cave is missing here is his muse, so he's presenting himself as a kind of Romantic poet-prophet deprived of inspiration, which had been the only thing that made the world a beautiful, bearable place.  And, like a true Romantic, Cave sees the best world as something in the process of disappearing.
Things become a bit clearer as the song goes on, introducing a catalog of outsider writers producing their work in a world that doesn't care for it, or for them:
John Wilmot penned his poetry
riddled with the pox;
Nabokov wrote on index cards,
at a lectern, in his socks;
St. John of the Cross did his best stuff
imprisoned in a box;
and Johnny Thunders was half alive
when he wrote "Chinese Rocks"

The world offers nothing: only inspiration from on high matters.  We hear this, and then we hear about more alienated visionaries enduring, or failing to endure, in an uncaring world:
Karl Marx squeezed his carbuncles
while writing Das Kapital.
And Gauguin, he buggered off, man,
and went all tropical.
While Philip Larkin stuck it out
in a library in Hull.
And Dylan Thomas died drunk in
St. Vincent's hospital.

At home or abroad, these are exiles, displaced, working without hope of worldly reward, and sustained only by a kind of autotelos, a commitment to one's private muse.  The fate of the artist deprived of this one sustaining thing is made starkly clear with the invocation of Dylan Thomas' inglorious end.
The next verse shows with absolute clarity the Romantic bargain: utterly alienated from this mundane world, the disciple of the muse receives something eternal instead:
I will kneel at your feet
I will lie at your door
I will rock you to sleep
I will roll on the floor
And I'll ask for nothing
Nothing in this life
I'll ask for nothing
Give me ever-lasting life

In the first three lines, we're not just out to free ourselves from an uncaring, mundane world: we're out to transfigure it with the power of the muse.  I've always thought there should be a band called the “Unacknowledged Legislators,” since there's such a powerful strain of mystical world-changing desire in rock music, just as their was in Shelley's dream of a world secretly remade by poetry.  Greil Marcus wrote, in Lipstick Traces, about the strange feeling one gets at a great rock show, the sense that something powerful is happening, that the disenchanted world outside the club doors is somehow about to be transformed forever.  He knew what he was talking about.  But Cave does him one better, with the change we see in the last line of the verse.  It's a confession of sorts, an acknowledgement that the world won't be remade by the song.  But the singer might be, and the deliriously dancing audience in front of him—at least as long as the spell lasts.
As we move toward the end of the song, there's a further acknowledgment of limitations, along with a kind of affirmation:
So if you got a trumpet, get on your feet,
brother, and blow it.
If you've got a field, that don't yield,
well get up and hoe it.
I look at you and you look at me and
deep in our hearts know it —
that you weren't much of a muse,
but then I weren't much of a poet.

The muse, it turns out, wasn't some celestial goddess, but merely a real person.  The song wasn't earth-shattering prophecy.  But that doesn't mean we should give up in resignation.  It just means we'll have to carry on, doing the best we can with whatever means of creation we have available in this otherwise fruitless world.  It's important, as Cave makes clear in the closing lyrics, still addressed to the muse despite his understanding that she is, to some extent, the creation of his own imagination, a projection onto the real person at whom he's looking:
I will be your slave,
I will peel you grapes,
up on your pedestal,
with your ivory and apes
with your book of ideas,
with your alchemy.
Oh come on,
send that stuff on down to me,

There she goes, my beautiful world…

The double movement at the end's the thing, isn't it?  The muse arrives—but at just that moment the vision slips away again.  That's the real Romantic state, burning with passionate intensity that can never slip into complacency, because the better world for which one wishes is always in the process of vanishing, and the merely mundane world from which one feels alienated—the world of Coleridge's farmer from Porlock—is always ready to intrude on the evanescent realm of the visionary.
So.  When I think about all the poets I know who love Cave's work, and all the poets I don't know, whose poems on Cave will soon fill an anthology, I think I understand the connection.  Poets, more than novelists or playwrights or memoirists, are out on the fringes of the utilitarian world we live in.  “Give up verse, my boy, there's nothing in it,” said Mr. Nixon, the successful novelist in Ezra Pound's “Hugh Selwyn Mauberley.”  That was 1920, and the world hasn't become less commercial since.  If you're plugging away as a poet nowadays, odds are you're in some sense a Romantic.  And I bet when you hit the treadmill (since only the most Romantic of Romantics aims at an early death), you've got Nick Cave on your iPod.