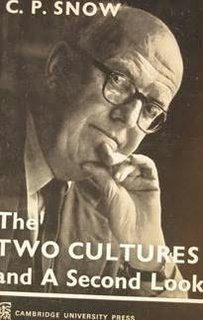 Hey y'all (I'm trying to blend in with the good people of Oklahoma, so I hope you'll bear with my affected "y'all," which I think may be indigineous to these climes). So y'all remember C.P. Snow's classic essay The Two Cultures, right? The one about how the sciences and the humanities had become two very different animals, incapable of communicating with one another except through a rudimentary system of grunts and mewlings? Well, I'm not going to say anything much about all that, but Snow's title seems like a good jumping-off point for the second installment of my ongoing chronicle of the eighth annual Modernist Studies Association. And I report from the field, folks: live from the 14th floor of the Doubletree Hotel in Tulsa, just down the hall from Michael Bibby, with whom I (and Grant Jenkins and George Hart and Tenley Bank) tore up certain parts of Route 66 last night. If by tearing up we mean having a beer or two and talking about teaching, his new book, my old book, and the horrifying truth about parenthood. Yep. Anyway. A lone ant from a tweedy anthill, ego scriptor.

So what's the "two cultures" angle on the MSA? It goes something like this:

Yesterday I was moaning and whining about the culture of ordinary academe, wringing my hands about how so many profs feel pressure from their higher-ups to write on certain prescribed topics in certain prescribed ways. I cringed and blanched at the administered nature of it all, the harnessing of the life of the mind into narrow specialities and narrowly-conceived genres of writing (I refer to how our genres of writing about literature are narrow — at least if they're going to be considered legit by the thesis committees, hiring committees, tenure committees, promotions committees, not to mention the hiring and promotions committees at the institutions where one hopes to encounter that great mirage, The Better Gig). I also bemoaned what I thought was a decline of participation by the less conventional academic conventioneers, the actual living poets and their devoted critics. Such types — especially the Legions of Langpo — once roamed the great savannahs of MSAs past with impunity, but this year the herd seemed rather thinned.

That was yesterday. Today, after retiring to my base camp and consulting my carefully compiled field notes, I've decided that there are two distinct cultures of literary study here at the MSA. The dominant one is the beast I described with such dismay yesterday: an administered and regulated and prescribed and sort of nervous creature. The counter-culture, though, is a stronger-than-I'd thought language poetry scene of sorts. This creature takes a very different form, but one that is not necessarily any more benign. Let me fumble through my safari gear and see what conclusions I can draw from my notes. Ah yes. Here's the stuff. Let's start with the dominant culture of the convention:


Name of Creature: Homo Academicus Modicus
Form of Discourse about Literature: Standardized (genres: peer-reviewed article, peer-reviewed book, nervous and defensive conference paper, generally comparing two writers in terms derived from a Revered Theorist)
Motivations: self-preservation, career security in a climate of relative scarcity
Relation to Others: professional, after the gestation period in grad school, where collective misery makes for a feeling of ritual belonging.
Notes: See my post from yesterday for observations on the inner life and outer behavior of the creature.

And now for the counter-culture of the convention:

Name of Creature: Vates Lingua Auto-Laudatius
Form of Discourse about Literature: Various, but with particular emphasis on the following:

A. Complimentary remarks about fellow language poets and a narrow canon of approved others.
B. Obfuscatory verbiage about European theorists from the Prescribed List, often combined with A, above.
C. General remarks about the political evils of the world, and the redemptive power of the kinds of poets mentioned in A., above.
D. Catalogs of the names of other members of the tribe, uttered ritualistically in order to consolidate the sense of belonging, and the sense of the specialness of the tribe.
E. Shout-outs to their homies in the room, all of whom are, to judge from the content of the shout-outs, well above average.

Motivations: The Advancement of the Cause of the Group. Lauditory commentary on one another's work, the creation of panels and publications about one's comerades, the propagation of the species via one's disciple-grad students, and similiar activities are the means to this end.
Relation to Others:Unlike the administered, professional, distant, Weberian world of Homo Academicus Modicus, Vates Lingua Auto-Laudatius lives in a world rich in face-to-face tribal interaction, a warm community of the likeminded. What might be taken as conflicts of interest in a culture that aspired to the (impossible) ideal of disinterest are here celebrated. "As I was having dinner with [name of specific Vates Lingua Auto-Laudatius on whose work one is about to speak during a panel], I was thinking about how important our work together has been..." What might be taken as indecorous actions by Homo Academicus Modicus are here considered quite acceptable -- working a mention of a book about oneself and one's friends that one has co-authored with one's friends into a panel on one's friends given with one's friends, say.
NotesThere is a powerful appeal to all this, especially when set against the background of the colder, less supportive world of Homo Academicus Modicus. There is less fear in this world, and no sense of administrative surveillance, though the unspoken codes of conduct are as real and as restrictive as in any small, premodern village (one doesn't speak ill of the tribe in front of the tribe, one venerates the appropriate gods and only the appropriate gods, one walks in suspicion of outsiders, and considers most of what outsiders have to say about the village to be pernicious lies told by the hostile). There is an apparently — and perhaps actually —greater variety of forms in which one may write or speak about literature, though the canon of texts is, perhaps, somewhat narrow, and public feuding is as discouraged as it is among Homo Academicus Modicus.

So. How to choose between the dominant culture and the counter-culture? One needn't run with either crowd, I suppose. And I admit I get a certain no-doubt-illegitimate frisson from telling myself I can keep my distance from both species, bestriding the MSA like some Byronic collossus as I shout out lines from Childe Harold's Pilgrimage like:

But soon he knew himself the most unfit
Of men to herd with Man; with whom he held
Little in common; untaught to submit
His thoughts to others, though his soul was quell'd
In youth by his own thoughts; still uncompell'd,
He would not yield dominion of his mind
To spirits against whom his own rebell'd...

Oh yeah. Like a rebel without a cause. Like a rolling stone. Born to be wild! Death before dishonor! Unchained to the mere thoughts of man, I rise in glorious and splendid isolation above the ... what's that? I've got to get my annual self-evaluation in to the department chair this week? But there's no time! I've got to update my vita, and put the bibliography of my paper into MLA format. And it's cold out and I can't find my tweed jacket... (cut to shot of Archambeau wandering off through the groves of academe, the tail end of his knit tie flopping into his styrofoam cup of coffee as he mutters about committee meetings and the grading of essays).

I unearthed this bit about Adorno on Barret Watten's Site. It's a pretty sharp (if dubiously syntaxed) take on how the autonomous artwork is both a critique and a symptom of the conditions in the world from which it comes:

At the heart of the aesthetic, for Adorno, was precisely a relation to necessity, directly connected to the determination of necessity by nature, that can be found in the hybrid aesthetics of market socialism. The "windowless monad" of the artwork still conveys its social constructedness through the critical distance from the relations of production it demands to be a work of art; the artwork is critical precisely insofar as it escapes from mere necessity (of production and consumption) as its fundamental determinant.

Posted by Archambeau at 12:21 PM No comments: