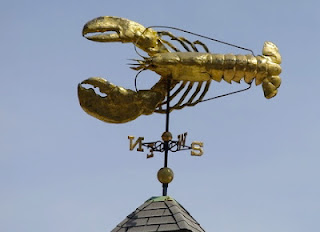 The National Poetry Foundation conference on the poetry of the 1980s has wrapped up, and the gathered poets, critics, and professors have dispersed, fleeing Orono, Maine for points south and west.  You know what this means: it's time for the post-conference Golden Lobster awards, given for distinction in conference-going.

Presenting this year's awards will be the ghost of Edwin Arlington Robinson, pride of Head Tide, Maine, author of Richard Cory, Miniver Cheevy, and Matthias at the Door, and favorite poet of Theodore Roosevelt.  Take it away, Eddy!

Robinson: Thank you, thank you, and welcome one and all to this gala event here in the Rae Armantrout Auditorium in Archambeau's Secret Backyard Writing Dojo.  A special welcome to President Obama and the first lady—sorry we couldn't get you better seats, but the tables at the front have been reserved for alumni of the Buffalo Poetics Program.  Console yourself with the thought that you aren't at the Iowa MFA table, which someone seems to have placed back by the men's room and the disused cigarette machine.  Let's not look to deeply into how that happened, and proceed without further ado to a list the winners in each category!

The Golden Lobster for the Demonstrable Power of the Word goes to... Alan Golding.  Professor Golding's talk on Armand Schwerner's poetic sequence The Tablets led to a run on copies of that title at the book fair, which sold out less than an hour after Golding's presentation.

The Golden Lobster for Professorial Gadgetry goes to...Aldon Nielson, whose array of laptops, tablets, cellular gewgaws and gizmos topped those of even the most geeked out grad students.  Some may have thought Nielson's digital watch was a disqualifying throwback to an earlier era, or perhaps a tribute to the calculator watches of the Reagan years (fitting in the context of the 1980s), but we have it on good authority that the watch actually controls the other electronic trinkets in Nielson's kit.  We look forward to seeing what Neilson brings to the next conference from what we can only imagine is a pre-conference visit to whatever equivalent Penn State has to Q's laboratory from the 007 films.

The Golden Lobster for the Clown Car Effect goes to Patrick Pritchett, who drove up from Harvard in a Honda Civic, into which he was seen wedging an unseemly mass of literary types on his return from Orono's only brew pub on Saturday night.  One portly Canadian poet-critic is still complaining about the imprint of the stick shift on his left buttock, though the bruise bears some resemblance to a patriotic maple leaf.

The Golden Lobster for Going Against Type goes to Norman Finkelstein, who was seen for the first time since childhood wearing a color other than black.  No more let it be said that he is the Johnny Cash of American poetry.

The Golden Lobster for Natty Attire goes to... oh! It's a tie!  Keith Tuma and Kathy Lou Schultz will share the award.  Tuma's floral-lined purple shirt and pork pie hat narrowly edged out another attendee's seersucker suit and cobalt blue shirt, since the panel judged the seersucker man to be wearing a few too many bangles and a mustache too overtly reminiscent of late-period Nietzsche.  Schultz's outfit, which might have come from the closet of Dorothy Parker, won extra points for matching her flapper-era high society bob haircut.  Could our schlubbish profession be undergoing a fashion renaissance?  Where are the chest-high shorts and madras shirts of yore?

The Golden Lobster for Audacity in Projected Scholarship goes to Joe Donahue, who was overheard in a local bar proclaiming that his paper at next year's Louisville conference will be called "The Gnostic Poetics of Barrett Watten."  I'll expect the ghost of Robert Duncan to be in attendance, his arms loaded with old copies of Poetry Flash.

The Golden Lobster for Stone Cold Badass Presence goes to...well, there's no surprise here, people.  It goes to Nathaniel Mackey, who, during his reading, emanated a vibe aptly described by one conference attendee as "Miles Davis with a trumpet mute."

The Golden Lobster for Breadth of Reference goes to Marjorie Perloff, whose plenary talk started out by drawing distinctions between Susan Howe and Charles Bernstein ("you don't get a lot of Cotton Mather in Bernstein") but ended up taking us from the tennis-and-martini aesthetic of the Morrow Anthology of Younger American Poets to the miseducation of the young to the theory death of the avant-garde to the change in style of poets' essays since the 1980s to the differences between philosophy and critical theory to a comparative analysis of the job market for poets over the decades.  Our telegraph operator admits to having run out of ticker-tape, and was unable to send the full transcript to our headquarters, but even the partial evidence justifies the award.

The Golden Lobster for the Kavorka goes, as it goes every year, to Grant Jenkins, who was seen standing in a mustard colored corduroy jacket in the lobby of the University Inn Academic Suites hotel as he was approached by wayward members of a bachelorette party, who swarmed about him, stroking his lapels and cooing about how nice his outfit was.  The next day (and this, I must stress, is not something I am making up) his hair gel set off the airport body scanner, reading as an "anomalous substance."  It is not known if the incidents are connected.

The Golden Lobster for Cornucopia Ex Nihilo goes to Steve Evans, Ben Friedlander, Jennifer Moxley, and Carla Billitteri, for delivering an amazing conference experience for all of their guests despite brutal budget cuts and all the usual constraints that conspire against conference organizers.

And finally... the Golden Lobster for Benevolent Spirit Presence goes to the late Burton Hatlen, who meant so much to poetry and to the University of Maine.  Let's close this ceremony with a round of applause in his honor.  We will not see his like again.

Posted by Archambeau at 2:35 PM No comments: