Raymond Federman On the Run 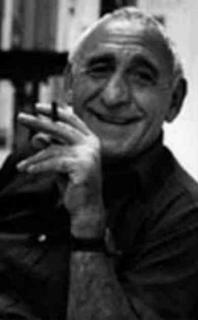 As those of you who've read my recent post on Stephen Burt's visit to Lake Forest know, I wasn't able to make it to Raymond Federman's gig at the College (I refer you to my earlier comments about the incompatibility of shellfish, campari, and the Archambaldian digestive system for an explanation). So, by way of making up for my inability to report on the visit, here are some excerpts from the campus newspaper's account, written by Melanie Meyer, a student at Lake Forest.

Considered a legend in the world of innovative writing, French author Raymond Federman told a group of students last Thursday that his style was defined by his childhood experiences in the Holocaust. "I am immortal," said Federman, who came to campus as part of the On the Run Lecture Series. "I should have been dead before, I'm not ready to give up."

"Language," said Federman, quoting Samuel Beckett, is "what gets you where you want to go and prevents you from getting there."

After opening with a reading from Loose Shoes, his book of short, fragmented writings, Federman read from his latest novel, My Body in Nine Parts. The novel is divided into nine sections, each describing a different aspect or feature of his body. The first aspect Federman shared was "My Toes." "Most people don't listen to their toes," Federman read. He then revealed the lessons have given through their colorful personalities, describing the big toe of his right foot as "neurotic." Federman also read from a passage on his scars, theorizing that scars have souls and want to tell stories.

Federman is currently working on three projects: a novel to be called Out of the Whole, an autobiography (Federman without Limits), and a memoir called The Sand Book about Samuel Beckett, whom Ferderman calls "the best author of the twentieth century."

Wish I could have been there, and at the traditional dinner and drinks with the author afterward, since by all accounts Federman is one of the most charming and funny guys you're likely to meet. Then again, it may be for the best. In the presence of a man who was a close friend of the man who wrote Waiting for Godot, I'm likely to get all wide-eyed and weird, cut him off mid-anecdote, grab him by the arm, and in a near swoon ask "what was Beckett really like?"

Posted by Archambeau at 2:00 PM