BlazeVOX vs. the NEA, or: Ezra Pound's Shilling 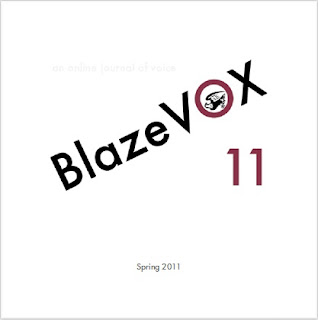 Those of you residing in the little teacup that is the contemporary American poetry scene may have noticed something of a tempest a while ago, when the National Endowment for the Arts issued a statement saying that it would no longer consider books published by BlazeVOX legitimate items on the curricula vitae of writers seeking grants.  In the eyes of the N.E.A., BlazeVOX was nothing but a vanity press.  There's a sliver of truth to the charge, in that BlazeVOX had, in some limited instances, asked authors to fund a portion of publication costs — but this didn't apply to all books, and not all authors asked for funding ended up having to contribute in order to be published.  The situation is complicated, really, and Anis Shivani has done a service to all of us teacup-dwellers  in publishing an interview with BlazeVOX's Geoffrey Gatza at the Huffington Post.
A more energetic inquirer than I would want to ask, and answer, a number of questions arising from the situation. Should all BlazeVOX authors be tarred with the same brush?  Doesn't the now-common fee paying contest model of publication amount to a kind of subsidy publishing system, since all authors submitting to the contest pay a small fee, collectively covering the cost of publication?  Does it matter that Tennyson, T.S. Eliot, Gertrude Stein, Walt Whitman, and a host of others were first published under what amount to vanity press conditions?  Should decisions about financial matters really be taken into account when judging art, or is this just a way to make the N.E.A.'s job easier?  Should we look into the way universities sometimes subsidize the publication costs of their faculty?
I'm not the energetic inquirer we need.  But I do want to note that a simple comparison of BlazeVOX's publishing model with the model of Elkin Mathews—who published many modern greats a century ago—reveals that, technological differences aside, the models are essentially the same.  Here's BlazeVOX's Gatza describing how his press works:

I would like to make it known that in our offer to publish books with a co-operative donation, if the author did not want to participate in this we also made an offer to publish their work as an ebook in Kindle and EPUB and PDF format and have it available on Amazon.com and iBooks. And if that was still not acceptable, we could wait until our financial outlook was stable and we would then publish their book without a donation. I think that this is a fair arrangement, as do many writers. I think that this is a very successful program and we were able to promote good writers.

Compare this to the time when Ezra Pound, freshly arrived and friendless in London, took the manuscript of Personae to Elkin Mathews, whose Bodley Head had published Yeats’ The Wind Among the Reeds and the two anthologies of the Rhymer’s Club, the most important documents of British aestheticism.  Pound dramatizes a “touching little scene in Elkin Mathews’ shop” this way in one of his letters:

Mathews: “Ah, eh, ah, would you, now, be prepared to assist in the publication?”

In both instances the publisher asks for help.  When it isn't forthcoming, he does what he can for the poems he admires anyway.

I don't think the juxtaposition of Gatza and Elkin Matthews answers any of the big questions about the BlazeVOX/N.E.A. tempest, but I do hope it gives a little perspective on what it means to be a publisher of innovative poetry, and on the importance and generosity of such people.
Posted by Archambeau at 9:21 AM