Jorie Graham's Disease: A Second Opinion ... and a Note on Belgian Surrealism 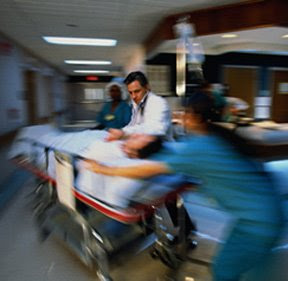 Stand down with the defibrilator! Put that syringe away! Dr. Mike Theune has arrived in the E.R. and tells me I made a misdiagnosis in labeling the seven poetic sins of our moment "Jorie Graham's Disease." One major symptom of the disease is a distrust of order, and Mike got in touch to tell me I've made a serious medical misjudgment. He drew my attention to a letter about Graham he wrote to Poetry a few months ago, a letter I really have no excuse for missing, since it appeared right after my own response to an irate letter about an article I'd written for the magazine. "My response ... isn't any sort of fully articulated response to your notion that so much poetry has caught Jorie Graham's disease. (Indeed, in broad strokes, I agree with your take on some of the major trends in contemporary poetry)," says Theune, "but it is an effort to say that Graham is not to blame for the disease that's been named after her."

Here's Mike's letter in it's full length (the one in the magazine had been edited to fit available space). Maybe he's right, and I'm due for a critical malpractice suit. Call my phalanx of lawyers! Ready my escape copter!

I agree almost completely with Jason Guriel’s assessment (in “Not Just Poetry,” October 2008) that “what our era is lacking” is a focus on the, in Camille Paglia’s words, “‘production of the powerful, distinctive, self-contained poem.’” Such—dare we call them “great”?—poems, of course, are being written today, but an increased focus on the book, the project, and/or process does tend to override the centrality of the single poem.

That being said, I disagree almost completely with Guriel’s assessment of the poems in Jorie Graham’s Sea Change. Guriel claims “there are no poems,” that is, distinct poems, in Graham’s latest book. Guriel’s reasoning for this claim seems to be, in large part, formal; put off by Graham’s use of a combination of Whitmanesque long lines and Williamsesque short lines, he states that “[t]he ambition to create individually realized poems has been washed away by [this] tidal form….”

To focus so centrally on form in Sea Change, or in any of Graham’s books or poems, is to miss a truly vital aspect of Graham’s poetics: poetic structure, the crafting of turns. In “Something of Moment,” her introduction to the issue of Ploughshares she edited (in Winter 2001-02), Graham argues that “[i]n a poem, one is always given…a stage upon which the urgent act of mind of this particular lyric occasion… ‘takes place,’” thus offering the poem an opportunity to “break.” According to Graham, “All such moments—where we are taken by surprise and asked to react—are marked places in consciousness, places where a ‘turn’ is required.” In “At the Border,” the poetic statement she published as a part of American Women Poets in the 21st Century (Wesleyan, 2002), Graham speaks of the importance of “the many hinge actions in poems (turns, leaps, associations, lacunae),” and she connects such actions with, among other kinds of poems, “haiku image-clusters.”

Graham refers (in Poetry, March 2008) to the poems in Sea Change as “exploded haikus.” But, however exploded they may be, the poems in Sea Change very often retain their commitment to making vital, dramatic, surprising turns. (A number of references to turns in the poems emphasize this continuing commitment.) Though they do not look like poems by Coleridge, Keats, or Frost, particular poems in Sea Change in fact turn, enacting movements of mind, in ways similar to the descriptive-meditative “Frost at Midnight,” the dialectical “Ode to a Nightingale,” and the ironic “The Most of It.” And their endings clearly attempt to (and sometimes, as in “Futures” and “Undated Lullaby,” perhaps do) achieve the shockingly singular kinds of arrivals one finds in these great poems.

The fault for this oversight is not all Guriel’s. Though the turn is everywhere in poetry (including in Paglia’s Break, Blow, Burn, which features a number of sonnets, and in Sarah Hannah’s “The Riddle of the Sphinx Moth,” the only poem Guriel’s review quotes in full), the turn has received very little of the sustained critical attention it so deserves. However, we—poets, critics, and readers—must pay more attention to turns. This way, we might see more clearly what is lacking from so many weak poems, and what is essential in what moves us.

Meanwhile, in news from the Belgian Surrealist desk, there's a new translation of one of Louis Scutenaire's essays up at Will Ashon's Vernaland blog. Called "Putting a Foot in It," it's a great piece of provincial resentment against the cultural establishment in Paris. Originally written to accompany a 1948 show in which Scutenaire's pal, fellow Belgian, and creative collaborator Magritte attacked the norms of Parisian artistic taste, it appears in what I think is its first ever English translation. I could be wrong about that, but I don't think so: if I could have found a translation, I wouldn't have had to recruit my pal, fellow Canadian, and creative collaborator Jean-Luc Garneau to help me cook up the current translation. It wasn't as easy as I'd thought: the thing is full of idiomatic expressions and plays on words. I tried to be more true to the spirit than the letter, when I had to choose one over the other. Anyway: if you want to see someone from the margins of Surrealism tee off on the central artistic powers of the day, check it out.