The Aesthetics of the Cute, Continued 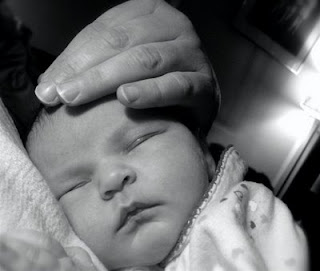 About a month ago, in reaction to the bombardment of comments I was getting about how cute my infant daughter was, I posted something about the aesthetics of cuteness. The basic argument was this: to say that a baby is cute is to get it backwards, since babies are, through some deep-seated Darwinian hoodoo, the basis of our ideas of all cuteness. It's not that a baby resembles the Platonic ideal of cuteness: the infant itself is the ideal, and cuteness the shadowy refraction of that ideal. Also, I harped on a bit comparing the sublime (big, awe-inspiring, even terrifying beauty, to which we feel inferior) the beautiful proper (elegant, refined stuff) and the cute (which is non-threatening, and to which we feel superior, even protective). I'm posting the definitions again, below the asterisk in this post, in the event that anyone cares, but not enough to click on the link to the old post.


Now here's some confirmation from what are probably the world's leading experts on the cute, the folks at Disney: 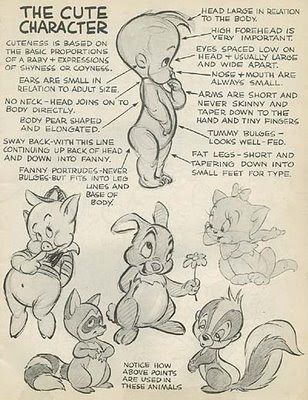 In other cuteness-vs-sublime news, here's an article that demonstrates how, in cartoons, it's always the cute who triumph over the sublime (not all of the villains here are sublime, but some hint in that direction, especially numbers six, three and one in the countdown). You have to read between the lines a bit, since the good people at Cracked magazine don't really foreground aesthetic theory. But it's all there.

-Is vast in scale. (Ever stood at the edge of the Grand Canyon? That sort of thing).
-Appears rugged and negligent. (I think it's the idea of immense force that matters here: again, think of the Grand Canyon).
-"Loves the right line, and when it deviates it often makes a strong deviation." Think of the gravitas of Mies van der Rohe's architecture: there's no whimsy here, no Frank Gehry crazy curves.
-Is dark, gloomy, solid and massive. (Again, think Miesian school architecture. All those classic Chicago buildings in the Miesian mode are big, black, imposing things).

The Beautiful (also from Burke)

-Is comparatively small (with reference to the sublime).
-Is smooth and polished.
-"Should shun the right line, yet deviate from it insensibly" (you know, the serpentine curve and all that. The eighteenth century engraver Hogarth actually wrote a slightly nutty treatise on how the serpentine curve was the very essence of beauty).
-Is light and delicate.


If we can generalize about the difference between the sublime and the beautiful, it's that the sublime is in some sense superior to us: it is bigger than us, stronger than us, has more gravitas than we do, and embodies forces that could destroy us, if they bothered to take notice of us. The beautiful, though, we meet on more equal terms. It pleases us, without overwhelming us or trying to be ingratiating. But where would the cute fit in this scheme? On this point Burke is silent. But not me! Here's how I see it:


The Cute (my own speculation)

-Is tiny.
-Is soft and possibly a bit squishy.
-Is rounded or even pudgy, rather than elegantly curving or austerely straight.
-Is vulnerable, or at the very least non-threatening. Even perky.


It's just a step further down the continuum that led us from the sublime to the beautiful: if the sublime is superior to us, and the beautiful our relative equal, the cute is in a meaningful sense inferior to us. It is no threat to us, like the sublime: in fact, it calls out for our protection. Not awe so much as "awwww!"