The Politics of Poetry

A while ago David Orr had a very sharp piece in Poetry about the politics of poetry. He was interested in why it's such a perpetually hot topic. "We don't spend much time wondering what poetry has to do with neuroscience or television writing or college basketball," wrote Orr, "yet these are important areas of American life that involve assertions about truth, form, morality, and the nature of culture—all subjects regularly claimed as poetry's turf."

Around the same time, Lucia Perillo posted to Poetry's Harriet blog about the left-wingishness of many American poets. She speculated that "it may be that poets are aligned with the left because they tend to share the concerns of the poor, or at least the not-rich, having only moderate incomes and job stability." An interesting hypothesis, I thought, but one that doesn't really look all that true: compared to the population as a whole, American poets aren't, as a rule, particularly downtrodden (of course there are exceptions).

Anyway, reading Orr and Perillo got me thinking, and I put together an essay that tries, in its bumbling way, to shed some light on these issues from a sociological perspective. Why do so many poets think of their work as political? Does it make sense for them to do so? And what's with the prevailing left-of-center view (which I share, but which must have some sociological explanation) (which doesn't mean it isn't a valid political viewpoint). The essay I came up with is called "Poetry, Politics, and Leanings-Left" and it's in the November issue of Poetry, and also available online. 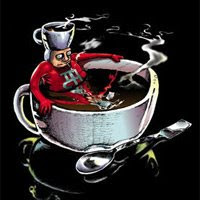 I talk about some of the same things I cover in the essay in the last half of this month's Poetry Foundation podcast, "The Savage Detective Turns to Poetry" (I'm not the savage detective: that's the much-more glamorous Roberto Bolaño, whose poetry is also featured). I thought I was groggy when we recorded the interview, but apparently the jug of java I downed just beforehand had kicked in by the time I started speaking: in contrast to the calm, controlled Don Share and Chris Wiman, I fear I may sound like some kind of jittery fiend, the kind of guy who'd grab you by the elbow on the subway and give you his nine-part theory on how the Aztecs invented the internet. (Did I ever explain how the Aztecs did that? No? Okay! A topic for my next post!).

And speaking of jittery fiends, I'm about to jump back into the fiend-friendly environment that is the blogosphere to read obsessively —nay, with maniacal zeal — about the election! Why? Because it's just like the ending of Peter Pan — you know, the part of the movie where, if we all clap hard enough, Tinkerbell will live. I mean, isn't it true that every time you read an online analysis of a swing state poll, Barack Obama gets just a little closer to the White House? 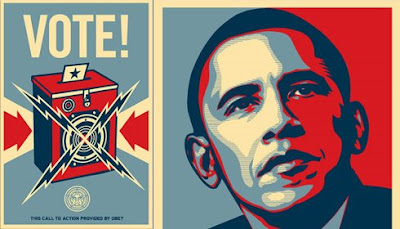