Don't you think Johannes Göransson's Action Yes has the best name for a literary journal since Poor. Old. Tired. Horse. (which was going for quite a different effect)? Sure you do! Agreed, then! Anyway, there's a new issue up, packed (as usual) with smarter-than-the-average-journal stuff, the lone exception being my own humble essay "The Avant-Garde in Babel," in which I try to respond to the overwhelming erudition of Per Bäckström's "One Earth, Four or Five Words: The Notion of 'Avant-Garde' Problematized" from the previous issue. Bäckström and I both try to get at just what it is we talk about when we talk about avant-gardism. He gets a lot further than I do.

I'm genuinely stoked about the direction Johannes is taking Action Yes: there's lots of adventurous work to read, and there seems to be a genuine effort to bring critical prose — often on large topics — to the fore, rather than confining it a back-of-the-book reviews section. Also, as an unreconstructed drawer of diagrams, I'm very happy that Johannes posted the chart I drew of Bäckström's schema of modernism and the avant-garde: 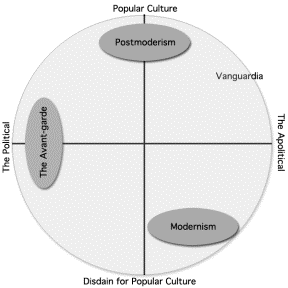 Speaking of departure, there's a knock on my office door, so I'm heading out of blogspace posthaste. Ciao!