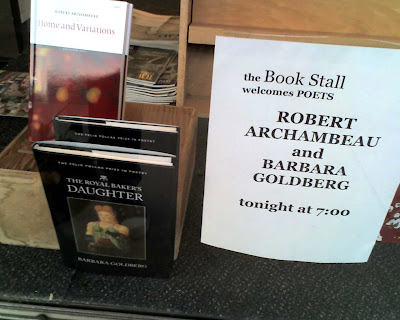 What's that you say? You want to hear about Raymond Federman's triumphant reading at the Lake Forest Literary Festival? I'd love to tell all, people, but I'm off to the dentist, and only have time to give you a last-minute head's up about the Archambeau/Barbara Goldberg reading tonight at 7:00 p.m. at The Book Stall at Chestnut Court (811 Elm Street, in Winnetka IL 60093). Winnetka's a short ride up from the city of Chicago, just north of Evanston. I know some city dwellers in Chicago think of the north shore suburbs as about as accessible as Alaska, but Google Maps will show you how short a trip it is, and it's only a block or two from the Metra train station on the Metra.

Here's the official scoop on Barbara Goldberg, with whom I'm stoked to be reading:

Barbara Goldberg, a senior speechwriter for a large, nonprofit organization in D.C., is the recipient of many grants and awards, including two fellowships from the National Endowment for the Arts and four Maryland State Arts Council grants. She is the author of six books of poetry, most recently the prize-winning Marvelous Pursuits (Snake Nation Press, 1995). She is translator, along with Israeli poet Moshe Dor, of The Fire Stays in Red: Poems by Ronny Someck (University of Wisconsin/Dryad Press, 2002), and After the First Rain: Israeli Poems on War and Peace (University of Syracuse/Dryad Press, 1997). Her work appears in such magazines as Gettysburg Review, Paris Review, and Poetry. She lives in Chevy Chase, MD.

Here's a poem and short profile from her reading at Woodland Pattern in Milwaukee.

Posted by Archambeau at 9:32 AM