The Poet as Specialist 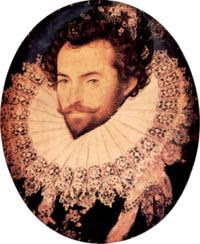 Sir Walter Raleigh wasn't a poet. There, I said it. I don't mean to diss the guy's verse-making chops: I think he wrote some very fine poems. But he wasn't a poet, not in the way we mean it today. He was a gentleman who happened to write poems, along with doing other things that an ambitious gentleman in a newly-ambitious age did, such as organizing voyages of exploration, founding colonies in the new world, jockeying around for position at court, getting thrown in the Tower of London as a political prisoner, and writing a history of the world. He didn't identify as a poet, not the way many of us do now ("This is Andrea — she's the new poet up at Picayune College"). But it was the Renaissance, and Raleigh was, in every sense, a true Renaissance Man. Calling Raleigh a poet would be like calling Leonardo Da Vinci a military engineer, or an anatomist. It wouldn't be wrong, just misleading.

Things couldn't be more different for poets (and for most other people) now. I mean, we live in a very professionalized world, and within academe (where the poets have, for the moment, landed) things are even more specialized than in most other areas. "He's new on the faculty," someone might observe as a nervous new prof passes by in his brand new Harris tweed. "Oh," the question would follow, "what's his field?" If the two observers were, say, math profs, the answer might be "he's a historian," but if the two observers were themselves historians, the answer would be more specific -- "seventeenth-century France," say (on larger campuses the newcomer could be identified by an even narrower slice of intellectual real estate -- "gender roles in seventeenth-century French legal theory," say, or "shoes in early modern France").

So every campus comes equipped with a designated poet. Built into the job description is an assumption that the person hired as a poet will have an identity distinct from that of the fiction writer and the non-fiction prose guy (the others in the writing wing of the department). The poet's identity will be even more different from those of the scholars and critics, who occupy an entirely different wing of the English department. And the institution defines the poet as even more different from that utterly alien creature with her strange ways, the playwright, who is housed in an entirely different department (theater) and exiled to an awkward corner of campus near the parking lots. One wonders what would have happened to Shakespeare in such a world ("yes, Bill, your plays are good, but should you really be wasting your time of these sonnets? They won't count as publications in your field when you're up for tenure, you know...).

It isn't just departments that define people as poets: most poets seem to look at the writing of poetry not as an activity but as the basis for an identity. The act of writing poems comes with a whole set of associated behaviors and attitudes (elements of bohemianism, eccentricity, spontaneity, etc.) most of them inherited from the history of how poets have lived over the past century and a half or so. (I once blogged a bit about how Karl Shapiro was all torn up about how his very bourgeois life didn't match the assumptions he'd inherited about what kind of person a poet should be — he couldn't bear the dissonance between who he actually was, and who he, as a person inhabiting the identity of "poet," was supposed to be). Poetry writing people, generally speaking, have come to internalize the notion that poetry isn't something they do, it's something that constitutes who they are. Walter Raleigh would have been a bit freaked out. 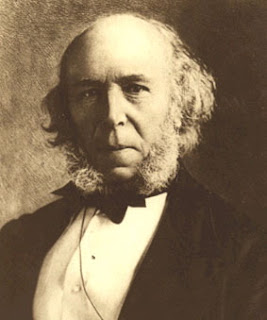 So how'd this situation come to pass? In the nineteenth century, when western civ was specializing and professionalizing at a frenzied pace, much of the thinking about specialization had to do with ideas of efficiency. Get people to specialize and they'll be incredibly good at their particular tasks, and when we coordinate these specialists through management (another specialization) we'll really see results — or so went the thinking of Herbert Spencer, one of the great nineteenth century gurus of industrial organization.

Lately, though, I've been intrigued by another way of thinking about specialization, one proposed by the founder of modern sociology himself, Emile Durkheim. In his book The Division of Labor in Society, Durkheim looks into the phenomenon by asking what kinds of needs specialization seems to fulfill, and comes to the surprising conclusion that specialization is less a matter of efficiency than we'd thought, and more a matter of social cohesion. 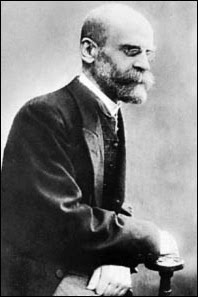 There are two parts to this hypothesis. Firstly, there's a warm and fuzzy part, in which Durkheim tells us that specialization's "true function is to create in two or more persons a feeling of solidarity."

"Great political societies can maintain themselves in equilibrium only thanks to the specialization of tasks" says Durkheim, who goes on to claim "that the division of labor is the source, if not unique at least principle, of social solidarity." So check it out: the effect, even the raison d'etre of specialization, in this view, is to make a community (I can see Ron Silliman, champion of poetry-as-community, nodding in approval). In a big, diverse, geographically dispersed, mobile society, we can form bonds across distance, ethnicity, gender, class, etc. We can identify with others in our capacity as poets. We can move to a new city, and instead of being alienated, we can meet like-minded folks through the poetry scene. Academically speaking, we've got a way to collaborate across campuses, to engage in conversation, etc. There's a lot of truth to this, I think.

The other part of Durkheim's theory is much darker, and therefore much more interesting. Specialization, he says, is important in that it limits competition, and therefore keeps us from tearing each other down. "In the same city," he says, "different occupations can co-exist without being obliged mutually to destroy one another, for they pursue different objects." We can parochialize a bit here, and for "city" read "campus," or better yet "department." Anyway, Durkheim goes on, saying "the closer functions come to one another, however, the more points of contact they have; the more, consequently, are they exposed to conflict."

I'm sure there's some truth to this, too. I mean, one of the reasons I took a job at a little liberal arts college rather than taking what many would have considered a more prestigious gig I was offered at a big university was that, in interacting with the members of the big university's English department, I quickly came to see that if I didn't just stick to writing poems and teaching poetry workshops, I'd be stepping on a lot of people's toes. I had an MFA, but I also had doctorate in literature. Since my Ph.D. thesis was an influence study (Romantics on Postcolonials), I had a background in, and wanted to teach and write about, a pretty wide range of things. Well, wide by current standards, anyway, though not by the standards of old-school generalists like, say, Erich Auerbach, whose wide-ranging, nay near-universal, knowledge makes my modest scope of interests look like it runs the gamut from A to C. Anyway, I was as good as told by a senior member of the big university's faculty that I wouldn't be teaching or writing about Irish lit, literary theory, the Romantics, or anything other than contemporary poetry if I gave a rat's ass about my chances of tenure. I was supposed to be the poet, damn it, and if I wanted out of my box I was going to be making a lot of people who'd invested in specific fields upset. The path of peace meant not straying beyond the boundaries of one's designated speciality.

(If, by the way, you want to read about the history of how English Departments moved from competitive generalism to a non-competitive array of specialists, each walled off in his or her own field, check out the final chapter of Brian McCrea's kickass book Addison and Steele are Dead. It's really good.)

I think it was in The Function of Criticism that Terry Eagleton said that all attempts at transcending specialization now, in our post-specialization world, are necessarily reactive, and somewhat self-conscious and clunky. I'm not even sure if we've got a name for someone who writes poetry and criticism, indulges in literary theory, teaches and writes about literature from a wide range of countries and periods, and does so for both specialized and non-specialized audiences. "Man of Letters" is archaic and sexist; "littérateur" is foreign enough that you need to italicize it, and Walt Whitman's attempt to Americanize it as "litteratus" is a little embarrasing (especially in his plural form, "litteratusses"). What's left? Roland Barthes' "scriptor"? The too-generic "writer"? I don't know if any of these will do in the era of specialization.

Luckily, the ethos of the liberal arts is kind of counter-cultural, at least in terms of professionalism and specialization. Although even at a liberal arts college, I found my colleagues expressing concern when I asked that we open up a new position in our department to poets, as well as fiction and nonfiction prose writiers.

"Won't it bother you if there's another poet on campus?" I was asked, in a thousand polite and concerned ways. I wasn't bothered, probably because of how I've never been comfortable being labeled that way (maybe this is because I write more criticism than poetry, maybe it's because, as an artist's kid, I saw too many of my dad's art-pals acting destructively and/or egomaniacally and excusing themselves by saying "hey, I'm an artist,"). Anyway, I'm hoping that Durkheim's hypothesis about specialization as the way of maintaining peace has some exceptions — otherwise Josh Corey's likely to sneak up on me with some of his badass Ultimate Fighting moves, leaving me for dead in a ravine near Winnetka.