War Poetry and the Aesthetics of Anonymity 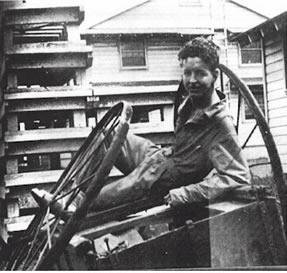 A few days ago John Peck dropped me an email about my last post on Kevin Prufer's "Army Tales." He raises some interesting issues about the anonymity of the soldiers in Prufer's poem, and in other poems about war:

...as I read thje poem for the third time, my ear took me not to the ambiance of WWI for literary comparison but to WWII and Jarrell's Pacific Theatre poems — specifically their tone. That association, if valid, raises an interesting question for me: do the ways in which these poems by a non-combatant at some distance and a combatant fairly close-up seem similar (enlisting feeling through generic detail, and then through their pungent round-offs) have to do with the anonymity to which people are reduced by modern warfare? That was already David Jones's major theme (as former combatant) in his In Parnethesis.

Though Peck's got Jarrell in the wrong place (Jarrell spent the war working at an Army Air Corps training center in the southwest), he's dead-on about the anonymity shared by the soldiers in Prufer's poem and in, say, Jarrell's famous "Death of the Ball Turret Gunner":

From my mother's sleep I fell into the State,
And I hunched in its belly till my wet fur froze.
Six miles from earth, loosed from its dream of life,
I woke to black flak and the nightmare fighters.
When I died they washed me out of the turret with a hose.

Both Prufer and Jarrell give us soldiers reduced to nameless figures performing in unspecified environments. But there's an important difference, I think: Jarrell's poem is part of a broad, midcentury humanist critique (think The Man in the Gray Flannel Suit) of the dehumanizing nature of bureaucratic, administered, gesselschraft-based society — Prufer's poem makes a gesture of this kind at the end, but for most of its length it is up to something else.

Right from the beginning of Jarrell's poem, when the ominous "State" substitutes for the mother, we get a strong sense of this humanist critique. C.D. Wright nailed it, I think, when she wrote:

[I]n war poem heaped upon war poem, beginning with "The Ball Turret Gunner," and never again with such dexterous compassion and plain eloquence, Jarrell blames the villainy of the world not on Germans (whose literature he would wholly adopt), nor on Japanese, but on the one neutrally destructive force, the State.(Field 35, 1986)

This puts Jarrell's poem closer to, say, Auden's "Unknown Citizen" than it is to Prufer's "Army Tales."

The soldierly anonymity in Prufer's poem has, I think, more in common with the anonymity of soldiers in the works of another poet mentioned by Peck, David Jones. David Jones's war poetry uses that great Modernist trope of juxtaposing past and present. But unlike an Eliot or a Pound, who'd often see the present as an ironic or sterile or debased version of the past, Jones (ever the Blakean visionary) saw a kind of eternity, in which things we think of a seperate are fused into one. Michael Anania set this straight for me, once, in an interview for Samizdat, where he said:

...for Jones the significant past is not the source of an irony about the present: it is a part of the synchronistic present. This sense of synchrony is part of Jones’ Christianity, in which all time is present in the eyes of God. So when Jones, a Welshman, goes to war in France (the experience behind In Parentheses) the event is religiously and ethnologically significant, and the events he experiences take on a larger resonance. For example, when a soldier falls in Jones, and his helmet falls down over his face, Jones associates that with the vision of visor the worn by knights at war over the same ground long ago.(Samizdat 9, 2002)


This synchronistic/Modernist anonymity seems to me to be what's at work in Prufer. Rather than offering a humanistic critique of bureaucratic social organization, such a poetry seeks to show the common life shared by all people (even those in combat against one another). So "the boy" in Prufer's army tales is both many different boys and a single boy at the same time. Like Jones, Prufer is a visionary poet, and tries to see with the eyes of eternity. (The technique is consistent with that of his book Fallen from a Chariot, which I see, more and more, as a single poem. If you want to hear me go on about it for a few pages, check out the next issue of the Notre Dame Review).

Anonymity in a poem like Jarrell's "Death of the Ball-Turret Gunner" (or Auden's "Unknown Citizen") is presented as a bad thing, thrust on to real people by an uncaring state that is perfectly willing to erase the individuality of people. But in Jones or Prufer, something quite different is at work. Anonymity here is a way of getting at the shared life beyond the individual life. Anonymity becomes a way of representing the common humanity of soldiers in different wars, or fighting on different sides in the same war.

Anonymity plays a number of roles in the art that comes out of war: the humanism of Jarrell and the visionary poetics of Prufer and Jones are just two. Consider, for example, the Tomb of the Unknown Soldier: there, the anonymity allows the remains within to serve as a metonym for all of the unknown dead.

This is not to say that an onomastic (name-based) aesthetic for the pity of war can't be moving, though. John Matthias works in this way in his poetry, as (most famously) does Maya Lin in the Vietnam Veterans Memorial where, as Wilfred Owen would put it, the poetry is surely in the pity. 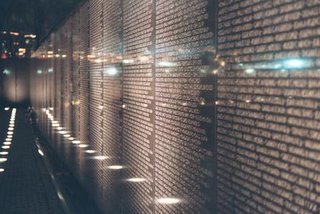 Posted by Archambeau at 7:35 AM