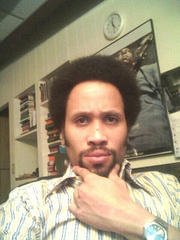 Kevin Andre Elliott, in dismissing the dichotomy of the School of Quietude and the Avant-Garde as tired and ready to be banished from literary discourse, has come out and said what many of us have been thinking. Who, other than Ron Silliman's old buddies from the wanna-be legendary past doesn't groan audibly when some Buffalo alum from the early nineties trucks out another load of heroic-us vs. oppressive-them rhetoric? And really, how far does a dichotomy like this take us in understanding poetry?

A case in point regarding these limitations: Jonathan Mayhew's recent test of avant-garde or quietude purity does more to illuminate the inadequcy of the dichotomy than it does to illuminate the countours of contemporary poetry. He asks his readers which set of poets they prefer. Do they like

Mayhew then goes on to tell us about the significance of our choices:

Most people, if they've read contemporary poetry at all, will have a strong inclination toward one or the other side. If you like poets on both lists equally, then you are a true eclectic.

So here's the dichotomous model. Red vs. blue states of poetry, with homogeneity in each group and no overlapping: 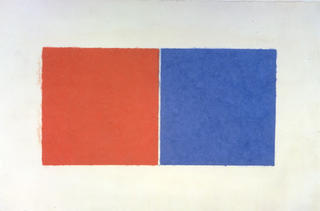 But ay yi yi. I mean, look at that first group of Mayhew's! Robert Pinsky and Charles Simic are so different, you've got to wonder about the usefulness of any category that lumps them together. Sure, they're both English professors living in the northeastern states, but so's Susan Howe. And Pinsky's commitments have been to a kind of essayistic, discursive, neo-Augustan poetry of clear statement and careful judgement. He was, after all, a student of Yvor Winters, and his strongest critical praise has been for the most essayistic side of poets like James McMichael and Frank Bidart. His most strident complaint about poetry (made in The Situation of Poetry) has been aimed at poetry in the American Surrealist tradition launched by Robert Bly in his magazine The Fifties. This deep-image stuff eschews statement and, in the manner of European Surrealism, makes a poetry that, as Bly put it makes an art “in which everything is said by image, and nothing by direct statement at all.” Charles Simic, in contrast to Pinsky, is very much the product of this kind of deep-image neo-Surrealism. He's the editor of anthologies of European and Latin American Surrealist poetry, and his own work is very like the Serbian poets he reads in the original: odd, elusive, hard to reduce to statements. And don't even get me started on the differences in the second group!

So, what else is there? One tiny step toward a more nuanced view of things would be to look for some kind of overlapping between the two dichotomized groups. Think of a Venn diagram, for example:

Not particularly useful, but better than the simple dichotomy. In poetic terms, we could probably interpret the chart like this:

A = Avant-Garde
B = School of Quietude
C = Jorie Graham

Or whatever. But this still doesn't get us into anything like the Realm of the Subtle Insight. I think we can get a little closer to this promised land with the help of David Kellogg. Back in 2000, Kellogg wrote an essay called "The Self in the Poetic Field" for Fence, which has to be one of the most underrated contributions to contemporary poetic theory.

For my money, Kellogg’s essay provides the best model for understanding the social and aesthetic structure of American poetry. Kellogg proposes a field of poetry charted along two axes, one running from tradition to innovation, the other from self to community. It is within this matrix that poets take positions through their various actions (writing poems, giving poetry readings, seeking or spurining certain audiences, seeking or declining to seek honors, displaying or downplaying antecedents, etc.).

The total configuration loosely resembles Bourdieu’s model of the cultural field; that it, the actual possibilities are on the inside of the field and the abstract value-identifications on the outside. As Kellogg put it,

There is an effect in the field made by each successive position-taking. I have assumed that the independence of each position-taking is compromised by the presence of other, adjacent position-takings, so that a cluster of position-takings congeals into a stable position within the field. The space of poetry as such is measured by the distance between the center and the four possible sources of poetic value. As these named sources are on the outside, critics have all too easy access to them and critical positon-takings in the service of canonicity are predictable. The structure is an open one, and its capacity for change is rather high….The novel feature of this structure for poetry is the manner in which the two axes are each informed by the formal and social loci of value. The loci of each axis repel each other. The axes join together in the center so that the two axes map a four-sides field when represented on a two-dimensional plane. One axis maps a set of social possibilities and the other a set of formal possibilities.

Kellogg’s field or grid can be visualized as a simple square with the four value-identifications (self, community, tradition and innovation) making their claims from the outside:

“The mirror image of self,” as Kellogg puts it, the community value-identification has to do not only with matters of subject and voice, but also with the audience a poet defines for him- or herself. While the poetry of self produces authors, says Kellogg, the poetry of community produces audiences. “Less important than ethnic, regional, religious, or sexual identity per se,” he continues, “is whether a certain poetry participates in, or is read as participating in, the social claims of one or more of these identities." Mark Doty, by this measure, is a poet of self, while Paul Monette is a poet of community. Adrienne Rich may well be the community-poet extraordinaire, claimed as she is by feminist, gay, and disability communities, all of whom she seeks to gather round her by her various position-takings.

So. I know Kellogg didn't quite pull Excalibur from the stone and rend the veil of oversimplification, but he did give us a much better swiss-army knife than the two-blade model (the one with the Quietude can-opener and the Avant toothpick) that Kevin Andre Elliot rightly tells us just doesn't cut it. 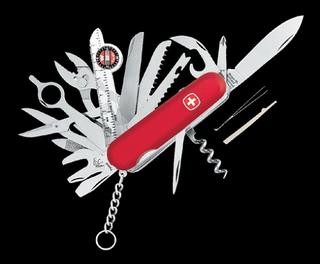 Posted by Archambeau at 1:19 PM