So, this happened Friday: 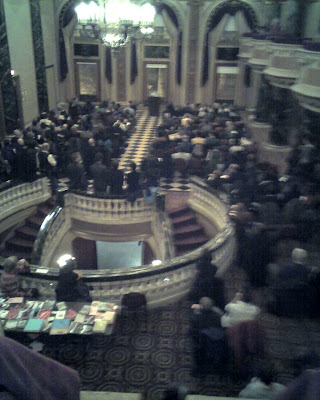 There it is: the great Chicago Poetry Marathon of '07, held during the Modern Language Association's annual calling together of the professorial tribes. During one of my darker moments in the process of organizing this shindig, I'd written to John Matthias, saying "the whole thing will be demeaning to all concened, I'm sure. I plan to fake a stroke in the first five minutes and be carried out by my minions so as to avoid the inevitable disaster." But my melodramatic acting chops were never called for: everything went off without a hitch. No bar mitzvah or charity fundraiser was in progress when we arrived; the booksellers didn't fall into turf wars at the tables, the caterers didn't drop an urn of steaming decaf onto the PA system, and despite Ray Bianchi and Garin Cycholl's threats, the Chicago poetry mafia decided not to deliver any kind of beat-down to the peace-loving Bay Area types. The guys who arrived with video cameras weren't a poetry-suspicious crew from Homeland Security monitoring us for future deportation to Gitmo, but archivists recording it all for the Chicago Public Libraries. Or so they said. And despite the snow, the crowd turned out in force. From my perch in one of the balconies (where I felt like Evita Peron) I estimated somewhere between two and three hundred people were there, which is, I think, a record. The readers showed up in force too, although Orlando Ricardo Menes was a no-show and Petra Kuppers was delayed (though she's since sent me a link to a video-version of the piece she was going to perform).

Some highlights for me included: