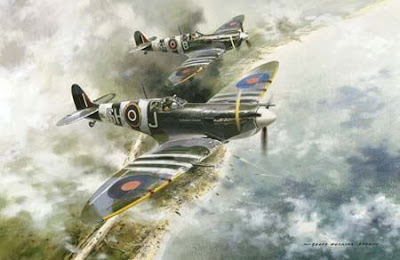 While we here in the United States were gathered round our Thanksgiving turkeys for our annual family re-enactments of Who's Afraid of Virginia Woolf, strange doings were afoot across the Atlantic, doings in the form of a dust-up among the more experimentally oriented British poetry crowd. Lest we vulgar, hostile, petty, fame-obsessed Yanks feel we're alone in our many vices, your present humble blogger offers this fragmentary account of the latest Britpo contretemps. 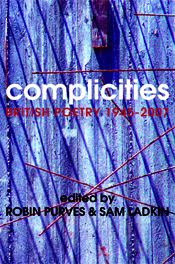 Toward the end of the scuffle, one of the participants claimed that the whole affair was a sign of the increasing Americanization and academicization of British poetry. In a sense, I think that's true. But I'm getting ahead of myself. Let's begin where the battle began: in Prague, where the always-interesting — nay cutting-edge — press Litteraria Pragensia issued a collection of essays called Complicities: British Poetry 1945-2007, edited by Robin Purves and Sam Ladkin.

While the book has an essay on W.S. Graham and another on Seamus Heaney, overall the book takes a pretty strongly Cambridge-centric look at the poetic landscape. Of the nineteen essays, at least four are either on or by Jeremy Prynne, two are on Andrea Brady, one's on Keston Sutherland (who wrote one of the Prynne pieces), two are on Chris Goode, and there's another on Peter Monson.

When I first received a publicity email blast about the book, I was a bit stoked: whatever else you may say about the Cambridge crew, they're not that well known in the U.S. — miraculous polymaths like John Matthias know about them, as do a few hard-core alt-Britpo types like Keith Tuma, Devin Johnston, and Romana Huk, and the current Chicago Review gang takes an interest, but it doesn't seem to extend too much further. Here, I thought, gazing at the email I'd rescued from my spam-filter, was a chance to delve deeper into what seems to be some fertile terrain. 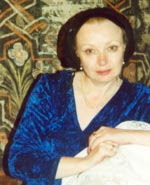 But seen from another perspective — specifically that of Geraldine Monk — the book was a bit of an insult. Monk, writing in to Keith Tuma's British poetry discussion list, took issue with the the subtitle "British Poetry, 1945-2007." The subtitle claimed a representative status for the book that was manifestly false, she said, and the contents skewed to a younger crowd of poets who hadn't yet "earned their stripes," while neglecting poets who'd been working away in obscurity for years. (Monk, by the way, was recently the subject of what looks like a good, and well-deserved, collection of critical appreciations: The Salt Companion to Geraldine Monk). 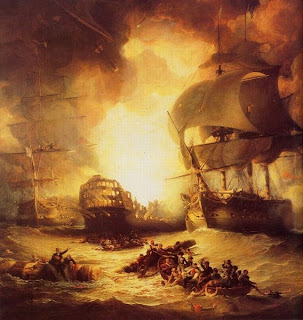 Monks' criticisms did not sit well with Keston Sutherland, who fired back a broadside worthy of one of Admiral Nelson's ships of the line. "Seniority be damned! Bah! Yargh! Fire all carronades and batten down the bosun's quindledeck! Bring me grog and a flaming spar-smutter!" quoth Captain Keston (I'm paraphrasing here), before launching into a very plausible explanation of the subtitle as a necessary evil, a publisher's ploy to lure librarians and profs into having their institutions order copies. After reading Bill Allegrezza's grim description of the economics of small press publishing I'm inclined to sympathy for this kind of concession to the logic of the market, even if it involves a bit of misrepresentation. Then again, I'm not a British poet who's worked in obscurity for decades only to find myself left out of a book that purports in its subitle to cover the field in which I've labored. Ask me how I feel about the issue again, after a book called Poet-Critic-Bloggers of the American Midwest, 1999-2015 comes out without so much of a mention of my tireless efforts, and you'll likely hear some grumbling. I'm steamed about it already!

Anyway. Après Keston, le déluge, avec un grand kaboom. Many people chimed in, some with sage advice and level heads, some sounding more hostile notes. It got nasty and weird, there was some name-calling, some ugly misogyny, and some sidetracking into bickering about who got, and didn't get, invited to participate in a poetry reading. Change the names and it might have been the Buffalo POETICS list back in the mid-1990s. The ever-even-keeled Mairéad Byrne did what she

could to convert anger into wit by a clever bit of verbal alchemy, but it took a while before things settled down. At one point one discussant suggested that she and the other women of the list secede and form their own discussion list. In part this was to be a withdrawal to "a safe place" away from male chest-thumping, and in part it was to be a continuation of the war-for-turf: the proposed topic for the list was the formulation of a strategy to get into the male-dominated anthologies. (By the way: the rhetorical move in which men are condemned for their overly emotional discourse really should have a name: I propose "The Reverse-Victorian Tongue Hold," since it quite effectively reverses the patriarchal move of dismissing women's discourse as emotionally motivated hysterics). Geraldine Monk wasn't enthusiastic about the idea, though, so I don't know if it will go anywhere.

That's about where things stood when the smoke started to clear and the clamor faded. Maybe the negative energy needed to be expelled. Anyway, it doesn't look like much has changed after all of the pushing and shoving and, of course, this tempest in the avant-teacup hasn't even registered in the world of laureateships and the TLS, where the experimental poets continue to be pretty thoroughly shut out.

The best thing to emerge from the whole affair, I think, has been Stephen Rodefer's reflections on the nature of literary reputation. In what I take to be a kind of valedictory address as the wounded limp away from the battlefield, Rodefer asked whether early recognition (the critical praise of young poets who hadn't yet "earned their stripes") was always a good thing; and whether critical neglect through a long career was always bad. While early recognition can be good for a poet (as it was for Robert Hass), it can also be as debilitating as the lack of recognition. I admire Rodefer's philosophical distance here.

So what about this business of the recent battle as a sign of the Americanization and academization of Britpo? Well, one of the sad characteristics of American academe is captured in the quip, attributed to Henry Kissinger, that "university politics are vicious precisely because the stakes are so small." In the end, I think this applies to the outpouring of anger about what boils down to little more than a questionable subtitle. In a world like alt-Britpo, there's so little recognition to go around, and so much deserving talent, that when the little dribs and drabs of recognition are thrown out into the world, it can all look a bit like monkey feeding time at the Kyoto zoo. Which is sad, really.

All I can offer as an antidote to the Americanization/academicizing/hungry-monkey-ization witnessed over the weekend is this bit of very English wisdom, from Samuel Johnson's blog entry (sorry, I mean his Rambler essay) of May 29, 1750. Johnson begins with a cold hard look at writers and their self-satisfaction: 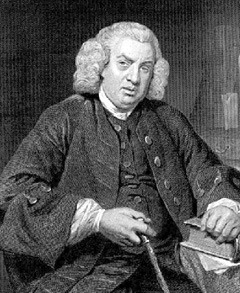 Every man is prompted by the love of himself to imagine, that he possesses some qualities, superior, either in kind or in degree, to those which he sees allotted to the rest of the world; and, whatever apparent disadvantages he may suffer in the comparison with others, he has some invisible distinctions, some latent reserve of excellence, which he throws into the balance, and by which he generally fancies that it is turned in his favour.

The studious and speculative part of mankind always seem to consider their fraternity as placed in a state of opposition to those who are engaged in the tumult of publick business; and have pleased themselves, from age to age, with celebrating the felicity of their own condition, and with recounting the perplexity of politicks, the dangers of greatness, the anxieties of ambition, and the miseries of riches.

But no such superiority exists, really:

It was well known by experience to the nations which employed elephants in war, that though by the terrour of their bulk, and the violence of their impression, they often threw the enemy into disorder, yet there was always danger in the use of them, very nearly equivalent to the advantage; for if their first charge could be supported, they were easily driven back upon their confederates; they then broke through the troops behind them, and made no less havock in the precipitation of their retreat, than in the fury of their onset.

....The garlands gained by the heroes of literature must be gathered from summits equally difficult to climb with those that bear the civick or triumphal wreaths, they must be worn with equal envy, and guarded with equal care from those hands that are always employed in efforts to tear them away; the only remaining hope is, that their verdure is more lasting, and that they are less likely to fade by time, or less obnoxious to the blasts of accident.... [But] if we look back into past times, we find innumerable names of authors once in high reputation, read perhaps by the beautiful, quoted by the witty, and commented upon by the grave; but of whom we now know only that they once existed. If we consider the distribution of literary fame in our own time, we shall find it a possession of very uncertain tenure; sometimes bestowed by a sudden caprice of the publick, and again transferred to a new favourite, for no other reason than that he is new; sometimes refused to long labour and eminent desert, and sometimes granted to very slight pretentions; lost sometimes by security and negligence, and sometimes by too diligent endeavours to retain it.

Against the uncertainties and inequities of ever-fickle fame, Johnson offers a kind of stoic distance, a resolution to labor on regardless, and to care a little less, if possible, about the laurels, and on whose heads they momentarily rest. You've got to love Johnson for that. And for the elephant analogy. That was good too. 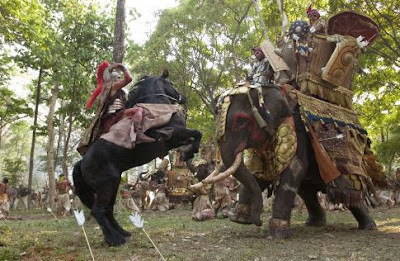 Posted by Archambeau at 10:43 AM No comments: