The Eccentric, the Repellent, the Abject: Enjoying Gabriel Gudding, Part One 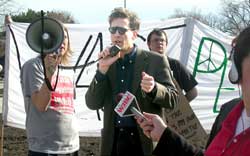 Since I'm planning on heading down to Myopic Books for Gabriel Gudding's reading on the 12th, I thought I'd have a look at his 2002 book of poems, A Defense of Poetry, which I haven't read since it came out. Coming back to it after having spent a lot more time with Surrealism, and a little more time with poets like Ted Berrigan, I'm a lot more sympathetic to the project now than I was then when, moody and deep-deep-deep into Geoffrey Hill, I saw that Gudding was on to something, but didn't really get into it (to paraphrase George Steiner, I got it, but I didn't dig it at the time).

Having recovered from my 2002 bout of gravitas (watching your country ramp-up for a needless, devastating war will do that to you), I'm in a better position to get down with Gudding's poems. His New York School influences are clear enough: there's the breezy, sometimes goofy, talkiness of the poems, sometimes combined with a faux- or semi-faux- naif attitude (oh, how changed is the world, when the New York School lives and breathes in Bloomington, Illinois). There's also a touch of (forgive me, poetry hipsters) Billy Collins in the humor, although usually with a darker edge.

As for Surrealism — well, there's nothing really by way of direct influence, although Gudding's world, like his sentences, does tend to operate in accord with a set of rules different from that which governs the square community. But before I made it a half dozen pages into this year's reading of A Defense of Poetry, I had to abandon my enormous red chair and run upstairs to dig my way into the back of the closet that consitutes the official home of the Samizdat archives in search of Michel Delville's punchy little article, "A Secret History of Belgian Surrealism." (Delville's piece is in Samizdat #8, which isn't on the website yet, but anyone who wants one can email me at the address on my profile page and I'll see if I can't hook you up with a copy). Here's what Delville had to say back then aboutGabriel and Marcel Piqueray, Surrealist poets active in Belgium in the 1950s: 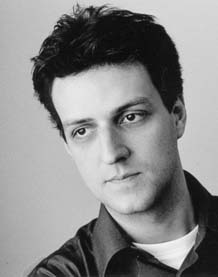 As for the irreverant, scatalogical aesthetics of the Uninhibited Poems, it is typical of the work of Marcel and Gabriel Piqueray. To me, the "Sproks" poems have always resembled a cross between Satie, Beckett, Buñel, and Laurel and Hardy. The proximity of food, garbage and shit in the poetry of the Piqueray brothers points to a poetics that does not shy away from describing fantasies of infantile regression and puts them to the service of a popular art that delights in imagining how the most banal situations can degenerate into absurdist extremes. Such manifestations of the eccentric, the repellent, and the abject create a space where the shock aesthetics of the revolutionary avant-garde meet the verbal games of the poèt-farceur, who considers poetry a form of slapstick comedy.

Gudding is certainly more poèt-farceur than revolutionary avant-gardist, but a lot of what Delville has to say about the Piquerays pertains to Gudding's poems. I mean, check sections seven through nine, and their footnote, of the book's 26 section title poem (these are right and left justified text blocks, but I'm feeling an html-deficit today, so you'll just have to imagine, class):

7. Is your butt driving through
traffic

that it should toot so at the
world? I am averse to urine,
yet I shake your hand upon
occasion;

8. I have made a whiskey of your
tears—and Joe-Bob made a
flu-liquor of your night-
mucus;

9. That some of your gas has
been banging around the
market like a small soldier
carrying a table. God-booby

---------------------------------------------------
Just as the fog is shackled to the
dirty valley stream and cannot go
out loosely to join the loopy clouds
who contain hollering eagles and
whooshing falcons but must stand
low and bound and suffer the
scratch of a bush and the round
poop of deer and the odd black
spore of the American black bear or
the bump of a car on a road or the
sick crashes of paintings thrown
from a rural porch, so also is your
mind bound to the low reach of
trash and the wet wan game of
worms and the dripping dick of a
torpid dog—and unlike the clouds
above you you do not feel swell but
clammy and pokey and sweaty: a
leaf-smell follows you, odd breezes
juke your brook-chaff, lambs and
rachel-bugs go up and forth in you,
and when a car passes through you,
windows down, the car-pillows in
that car get puffy, absorbing water in
the air, and those pillows become
bosoms, gaseous moving bosoms,
and that is the nearest you come to
bosoms.

Okay! Right! I imagine you can see why the transition from Geoffrey Hill's sombre and powerful work to this sort of thing was a bit tough for me. But only a year earlier I'd been translating the Piqueray bros., and I should have seen the parallels. I mean, you've got the eccentric, the repellent, and the abject front-and-center with the elaborate treatment of flatulence, and the claiming of this sort of thing for poetry gives the same kind of transgressive frisson now as it did decades ago — good taste gets jumped and roughed-up by the abject elements of the body. 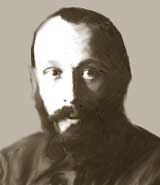 But wait! There's more! Not only does Gudding bring the abject into the poem, he attacks two kinds of discursive pretentiousness at once in his footnote. Here, he pulls a classic act of Bakhtinian transcoding (the mix of high and low for comic effect) by writing about "poop" and the weirdly quaint "bosoms" in an overly-long, overly-elaborate epic simile ("just as blah-de-blah-de-blahdeeblah, so blahdeblah-de-bah"). But just as the epic simile gets skewered here, so also does that other form of high-discourse writing, the footnote, signifier of scholarly earnestness.

If I weren't out the door to catch a movie I'd try my hand at a critical pastiche (see "Pastiche as Criticism," two posts back), adapting bits of Delville's piece on the Piquerays into a brief discussion of Gudding. But this will have to do: the projectionist waits for no man. 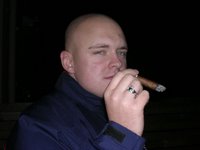 Steve Halle will be at the Gudding reading. Let's hope he brings cigars for everyone!

Posted by Archambeau at 1:15 PM No comments: Links to this post